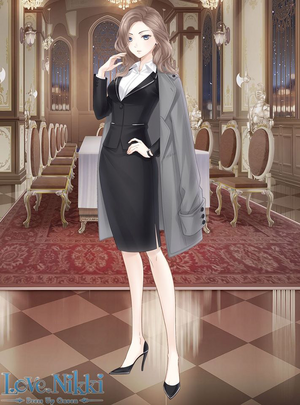 Hiber is a character in Love Nikki. She works as a model for the Mercury Group and is a member of the Phantom Thief Family.

Hiber is even-tempered, calm and collected. She gives off a mysterious air, and seems to know more than she usually tends to let on. Kimi describes her as "fierce, independent, and disobedient".[2]

Both members of the Phantom Thief Family, Sofia was chosen to be the inheritor rather than Hiber, even though Hiber enjoyed the thrills of stealing and escaping more. However, Sofia preferred to dance and act on the stage, rather than carry out missions for the family. When Sofia stopped talking to her family and became a dancer for three months, Hiber came to one of her performances to confront her.[1]

Hiber worked as a renowned model for the Mercury Group. She attended the White Blossom Banquet, where she modeled some of the designs available for auction.[2] Her family member Sofia did as well as a member of the December Troupe.[7] After Nikki used Kimi's knowledge in order to bid high on a cheongsam, Hiber approached her, telling her she had good taste and insisting that she was strong and powerful.[8]

After the White Blossom disappeared, Hiber pointed out to Nikki and her friends that the emergency exit door was open, and they rushed out in an attempt to apprehend the thief.[3] However, this was only a ruse to hide the fact that Hiber had been the one to steal the dress, under Reid's orders.[9]

Hiber passed the dress along to Sofia, but Sofia returned the dress to Kimi, who she believed was its rightful owner.[9] Sofia later came to Hiber's house in the Welton suburbs, where she gave Hiber two things. The first was a warning, to stay away from Reid. The second was a favor; she asked Hiber to attend something with her, though what it was exactly was not clear.[10]

During the Lily Fashion Carnival, Hiber tampered with the breaker box before modelling the Star Lily. A blackout occurred while she was on stage, and in the dark Hiber took the time to hide the Star Lily in her dress, all while making it look like it had been stolen. She screamed in order to hide any noise she would make by hiding it. She also fell down, breaking her heels to make it look like she was the victim. When the lights came back on, Nikki and her friends went on a hunt to determine who the thief was.[4]

Toto and Sofia helped Nikki determine that it was possible that Hiber could have stolen the Star Lily for herself. They confronted Hiber, and laid down their deductions, while Sofia located the Star Lily where Hiber was staying.[4]

Hiber works for Reid as an employee of the Mercury Group. She was also hired by him to steal the White Blossom. Sofia warned Hiber to stay away from Reid, but Hiber only replied to say that he was still her boss.[10]

Hiber and Sofia are related, both being members of the Phantom Thief Family, though their exact familial relationship is unclear. Sofia was chosen over Hiber to be the inheritor of the family, even though Hiber enjoyed being a phantom thief more.[1] The two clearly butt heads, as Hiber sees Sofia as too idealistic, and she wasn't that surprised when Sofia betrayed the family and gave the White Blossom back to Kimi.[10]

It's said that Joe has asked out Hiber many times before, but she's always turned him down.[2]

Retrieved from "https://lovenikki.fandom.com/wiki/Hiber?oldid=143739"
Community content is available under CC-BY-SA unless otherwise noted.