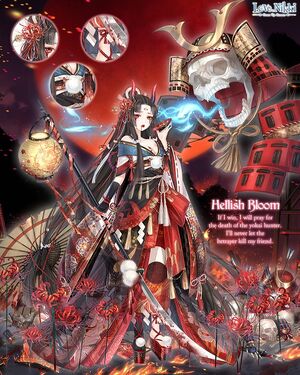 If I win, I will pray for the death of the yokai hunter. I'll never let the betrayer kill my friend.

Hellish Bloom is a Cloud suit that could be obtained from the Yokai World Event. It can now be obtained through Crafting. The suit Pragya Princess must be crafted in order to craft Hellish Bloom.

I'm an inborn yokai. I never sympathize with those humans who were turned into yokai.
– Phantom Flower

Humans are educated that the bad people will turn into yokai since childhood, so they believe in it.
– Death and Joy

He's a good cat yokai a little inferior to me. He never killed a human even they hurt his friend.
– A Persistent Wish

He mentioned his brother a lot. I don't know where he's now. Maybe killed by human too.
– Akkiko the Fox

Yokai has its own way. I think yokai lives a much interesting life than a human.
– Fun of Manjusaka

There are two kinds of yokai. One is inborn yokai, the other is yokai turned from a human.
– Toxic Thorn

Yokai are so poor. This kind of conception is but human's fool delusion. We are good.
– Blade of Burial

The only exception is the Yokai Hunter, who is a yokai itself but hunts other yokai.
– Seal Reopened

Though I disagree that human and yokai can live in peace, I don't pretty much like fight.
– Bloody Flame

Though I know quite a lot of yokai that turned back into humans, I heard no news that they became happy.
– Wine of Passion

The Yokai Hunter will come too. It says that all the yokai that saw his face were killed, so nobody knows him
– The Day of Reunion

A friend who used to preach that human and yokai can live in peace was killed by human later.
– Flower in Hell

I join Yokai Word every year just to kill some time. It's the only place yokai fight each other.
– Beloved Bones

I remembered that when he was gone, it's the bloom of Manjusaka and the opening time of Yokai World.
– Miss for You

Play nice or get turned into a yokai! It's an old story in our village.
– Another Banquet

Human witnessed my figure on the battlefield, so I was named the Hellish Bloom.
– Flower on Battlefield

If I win, I will pray for the death of the yokai hunter. I'll never let the betrayer kill my friend.
– Hellish Bloom

The clothes and accessories' descriptions talk about a female yokai who was born as such rather than be a human turned into one, and is rather distrustful and cynical regarding humans due to their fear of her kin. She talks about a kind yokai who was a friend of hers and believed that yokai and humans can live in peace, only to be hunted down by humans; she also mentions a Yokai Hunter, a yokai who hunts down other of their own kind, and the Yokai World even where yokai of all kinds fight one another. 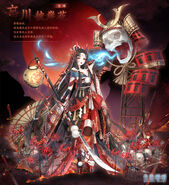 Retrieved from "https://lovenikki.fandom.com/wiki/Hellish_Bloom?oldid=145708"
Community content is available under CC-BY-SA unless otherwise noted.