Heidi is a town in Pigeon Kingdom. It is a town that lives a pastoral and nature-oriented lifestyle.[2]

Heidi is said to have both the city's convenience and the country's peace. The people in Heidi are welcoming to newcomers and outsiders. They have a deep connection with nature, believing that the land is their holy place and that courage and the actions of humans come from nature.[3]

While the December Troupe was on tour in Heidi with the play 'Magic of Magi', a man called Earl Essassin, who owned King Sayet's collection 'Autumn of Wind Valley', received a note from a phantom thief stating that they were targeting the collection.[1] The note was sent by Sofia and/or Hiber, who were acting in the play to cover for their pursuit of Autumn of Wind Valley, and had determined the location of the collection by subtly asking for information.[4]

That night, Earl Essassin prepared guards to help guide Sayet's collection. However, a sleeping gas filled the room, and Essassin, unwilling to open the window, fainted along with his guards. The next morning, 'Autumn of Wind Valley' was gone, and it has not been seen since, despite Earl Essassin's anger.[1] 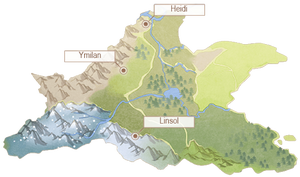