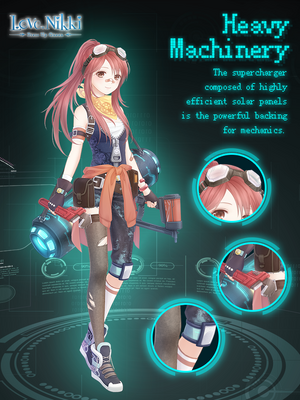 The supercharger composed of highly efficient solar panels is the powerful backing for mechanics.

Heavy Machinery is an Apple suit that can be obtained through evolution and princess stages. It is also the Target Suit for V1: 16-6 Airship's Lies.

He cannot stand rules, even a tidy hairstyle. So what? His smile will keep him at the best.
– Elegant Ponytail

The super charger is composed of highly efficient solar panels is the powerful backing for mechanics.
– Super Battery

The denim waistcoat with gear patterns, being solid and resistant to dirt, is popular among female mechanics.
– Gear Denim

We’re unsure if it's the original design, or a very worn-out hem. The streaks are permanent oil stains.
– Dark Pattern Denim

The gear patterned gym shoes are actually waterproofed--besides the shoelaces, as those are just decoration.
– Gear Canvas

A mechanic can easily hurt his eyes, so it's good to wear goggles. Don't act cool and put them on your head!
– Eye Protector

There may be a disagreeable scar under the band aid at the bridge of the nose. Maybe there're some freckles.
– Mysterious Band Aid

The gold scarf was bought at a flea market for it’s nice gear pattern. It’s essential for the machinist style!
– Golden Gear

A pair of solid red pipe tongs is a must for mechanics.
– Red Pipe Tongs

Everything that is temporarilyuseless can be hung around your waist, including your jacket and toolbag.
– Follow Your Heart

Mechanics also need to protect their hands, so they all have such a pair of durable and flexible gloves.
– Gloves of Mechanics

A staple gun is a common tool for mechanics, but can be used as a defense when in danger.
– Staple Gun

Mechanics need a simple hairstyle at work, but as girls, they also want to be fashionable, right?
– Elegant Ponytail (previous description)

The suit describes a girl who works as a mechanic. She balances fashion and practicality, but wears mismatching socks when the alternative is being late for work. Ironically, though it's noted that a mechanic shouldn't "be cool" and wear eye protection on their head, the girl does wear her eye protection on her forehead.

Retrieved from "https://lovenikki.fandom.com/wiki/Heavy_Machinery?oldid=145709"
Community content is available under CC-BY-SA unless otherwise noted.