Hayden is a town in Lilith Kingdom. It has a reputation for being the "Fairy Tale City", and it is named after the famous fairytale writer Hayden.[6]

In the year 530, the famous fairytale writer Hayden was born.[7] At some point in his life, he lived in Hayden with his pet rabbit and assistant Lillian. After Hayden's death, Lillian became a librarian in order to protect his stories.[2] The town was named after him and given the nickname "Fairy Tale City".[6]

Yvette, the secretary of former Prime Minister Nidhogg, was assigned to work here after Nidhogg defected. With the rest of the workers in the municipal government, she helped to assist with Hayden's 150th birthday celebrations. She arranged the Dessert Tower, a part of the opening ceremony, which was a complete success.[4] 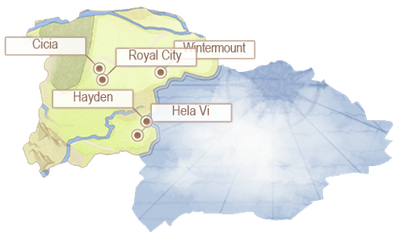