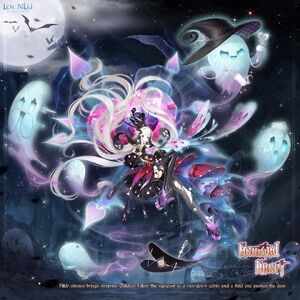 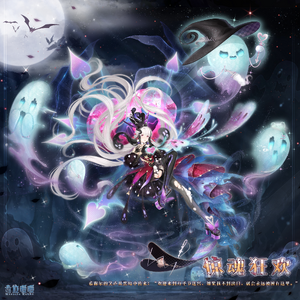 Hildr always brings surprise. Children follow the signpost to a run-down cabin and a bold one pushes the door.

Haunted Heart is a Festivals suit that could have been obtained from the Thrill Night Event.

When the jack-o'-lanterns light up, children gather in front of a tree where a fingerpost directs to Hildr.
– Wicked Night

Hildr always brings surprise. Children follow the signpost to a run-down cabin and a bold one pushes the door.
– Night Shiver

Hildr laughs in the dark, 'Welcome to Halloween Maze! Find the exit or you shall be trapped here forever.'
– Sealed Maze

The children have heard lots of tales of terror but this time they are part of the story. To be scary or thrilled?
– Broken Memory

The diverse paths in the maze are all designed by Hildr based on the tales of terror she used to tell.
– Splendid Maze

Until the last child leaves the maze, Hildr still waits outside. After a while, a ghost-look youngster comes out.
– Halloween Ghost

The tales heard before seem to be true. As the white ghosts flash before their eyes, children wrap up their coats.
– Tales of Terror

As it's getting dark, the giant lantern emits a warm light. Hildr gives candies to the children who find the exit.
– Peach Whirlwind

That night, children have bizarre dreams where everything is possible. For all of them, this is the best Halloween.
– Fancy Nightmare

In the dimmed light, children split up and walk in different paths. In a maze of terror, do pluck up your courage!
– Blank Puzzle

As children gradually come out, Hildr comforts the badly shaken children and wipe away their sweat at the exit.
– Naughty Heart

As the children are hesitant at the fork, the heavy footsteps behind their backs scare them to flee in any path.
– Destined Choice

The dimmed jack-o'-lantern at the corner is carved out a wicked smile. Once someone approaches, it seems to squeak.
– Weird Tears

A gust of cold wind like an intangible hand sweep past the shivering children, sending the demon's whisper.
– Tacit Whisper

Children are driven to a mirror wall but they find a passage behind the mirror as someone accidentally touches it.
– Weird Claws

Hildr always wears a smile. It's only when she reunites with the youngster that she sheds the tears of joy.
– Tears of Joy

Hildr smiles at the youngster. They used to slide past each other in the bustling world but finally meet again.
– Scary Scream

At celebration, the crowd is amazed at the youngster's dressing but the two just make a silent exchange of smiles.
– Night Encounter

Under the friendly face is a weird expression. Nobody knows who will be tricked by the joker.
– Strange Smile

An unknown smile comes over in the night. Something is hiding in the shadow under the moonlight.
– Phantom under Moon

Hush! Be quiet. This is a hide-and-seek game with the witch. Make no sound or you will be found by the witch!
– Taboo of Silence

It's a challenge of bravery. In the long and dark tunnel, who's crying in the corner?
– Tears of Fear

As learned from Pumpkin Kaidan, Hildr is a kaidan (ghost story) storyteller who entertains children every year. This time in Haunted Heart, under the usual tree where Hildr tells her stories, there is a finger post instead that points to a run-down cabin. When a bold child opened the door, Hildr laughed in the dark and said: "Welcome to Halloween Maze! Find the exit or you shall be trapped here forever". This year, the children were going to be part of the story, and all the diverse paths Hildr designed were based on the tales of terror she used to tell. While they were hesitant at the fork, the heavy footsteps behind their backs scared them to flee in any path. Thus, in the dimmed light, the children split up and walked different paths. The stories Hildr told them almost seemed true: hidden passages behind mirrors; white ghosts flashing before their eyes; a wicked-smiling jack-o'-lantern squeaking when approached; cold winds sending the demon's whisper; an insincere trickster of a joker; and a hide-and-seek game with a witch. It was a challenge of bravery.

As the day grew darker, a giant lantern emitted a warm light at the (supposedly) end. Hildr gave candies to the children who found the exit. As they gradually came out, she comforted the badly shaken children and wiped off their sweat. She waited at the exit until the last child and after a while, a ghost-looking youngster came out. She always wore a smile but when she was reunited with the youngster, she shed tears of joy. The two used to slide by each other in the bustling world but now they finally met again. She smiled at the youngster. While the crowd was amazed by the youngster's outfit at the celebration, the two silently exchanged smiles.

That night, children had bizarre dreams where everything was possible. For all of them, this was the best Halloween.

It is very likely that the youngster is the same boy from Pumpkin Kaidan, who was very dear to Hildr. Just like the youngster Hildr had a heartfelt reunion with the boy. However, Hildr and the boy are the same age, so the word choice "youngster" does not make sense in this context.

Chibi
Add a photo to this gallery

Retrieved from "https://lovenikki.fandom.com/wiki/Haunted_Heart?oldid=149626"
Community content is available under CC-BY-SA unless otherwise noted.