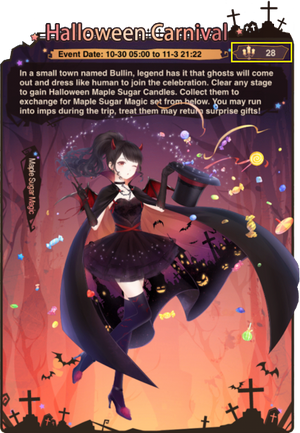 The Halloween Carnival was an event that ran from October 30th to November 3rd, 2017.

Stages were to be cleared to collect

for pieces of the event suit, Maple Sugar Magic.

Each stage will give 1 to 3

Occasionally, the player will encounter a little devil asking for some

. If given, she would reward the player with

. Her response would differ depending on the reward.

Refusing her would reward nothing and her demeanor would become downcast.

A small amount of

Retrieved from "https://lovenikki.fandom.com/wiki/Halloween_Carnival?oldid=119990"
Community content is available under CC-BY-SA unless otherwise noted.