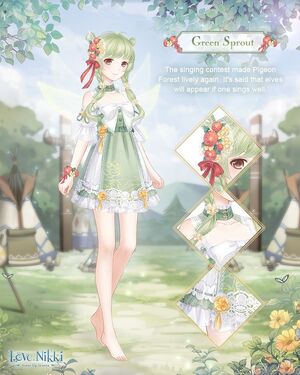 The singing contest made Pigeon Forest lively again. It's said that elves will appear if one sings well.

Green Sprout is a Hidden Suit that could have been obtained from the Elf Parts Pack in the User's Shop from June 25th to July 21st, 2019 for $1.99 USD.

The singing contest made Pigeon Forest lively again. It's said that elves will appear if one sings well.
– Forest Elf

Iron Rose and Nikki also came to see the contest. The contest is almost over, but elves haven't appeared.
– Green Sprout

There suddenly begins the elves' singing. Mela also felt surprised and then smiled. She won.
– Banquet of Flowers

Watching the contest, Nikki also wanted to be on stage. Suddenly, an elf took away the host's microphone.
– Fluorescent Green Wings

\In the Pigeon Forest, it's said that if you sing well, elves will appear. So a singing contest was held in the forest, and Nikki and the Iron Rose decided to attend. Mela decided to participate, and to everyone's surprise, including Mela's, the elves appeared, singing as well.

Retrieved from "https://lovenikki.fandom.com/wiki/Green_Sprout?oldid=132362"
Community content is available under CC-BY-SA unless otherwise noted.