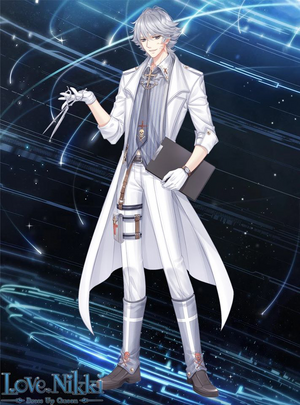 Gray Raven, also known as Morrison, is a character in Love Nikki. He is a doctor who operates the Sixth Clinic, a notorious clinic in the dangerous city of Losol.

Once Morrison graduated from school and was admitted to medical school, he told her of his promise to heal her. She passed the tests for the same school as him, but fell into a coma after only half a year. When she was 18 years and 5 months old, she died. He had only just become a doctor. It is indicated in other servers' translations and by the suit title, "Memory Gone", that his memories of these years faded.[3][4]

At some point, Morrison was imprisoned in Ruin Island. He used his inventions to escape jail, and left Ruin.[7] He hid his past and had a clean slate in Apple; however, he retained knowledge of technology from Ruin Island.[6]

Morrison started his Sixth Clinic, a place where souls are traded for power,[5] in Losol. There, he became a well-known and respected pharmacist.[8] He also began to produce a reagent called No. 7 Reagent, which had the power to reduce the pain caused by invoking the blood curse.[1]

At some point, he also came to own a laboratory in the Snow Corridor in North Kingdom. It had stringent security and human-sized incubators.[9]

He adopted Peachy at a later date. He offered her anything she wanted, and she asked if that meant she could ask for him to be her boyfriend. It is likely that he refused her request.[10]

Morrison contracted Louie to retrieve an "experimental dossier", which actually referred to a key, for him in a fortress at the Snow Corridor.[8] The fortress was guarded by men representing the Nameless Chivalric Order, including Louie's old teacher Lionel.[11] While Louie talked to Lionel, Morrison sent a robot to retrieve the key instead.[12]

Louie and the Nameless Chivalric Order followed the robot back to Morrison's lab, where Louie attempted to disable the security by turning off the power. After shutting it down, they went down a secret passageway, where Morrison was attempting to escape via helicopter, holding the key. He criticized Louie for deciding to work with the Nameless Knights without even knowing what they were after and for making Morrison do the job of retrieving the key himself. The knights managed to handcuff Morrison.[9]

Nidhogg arrived then in order to free Morrison, and successfully engaged Louie and the Nameless Knights in a fight. Morrison managed to free himself, and Lionel stabbed him with a spear, critically injuring him, but not before he was shot by Shade. They ceased the fighting, and Nidhogg carried Morrison away.[13]

Due to the actions taken by the Nameless Knights, Morrison was revealed to the world as a notorious demon doctor rather than a respected scientist.[14]

Gray Raven continued to act out of his clinic in Losol, where he would perform operations on people in return for their souls. These operations have the capability of giving someone powers, but each time they used the powers, they would age.[15] One such person was Resa, a girl who became an idol by exchanging her soul for brilliance and fame.[16]

Retrieved from "https://lovenikki.fandom.com/wiki/Gray_Raven?oldid=144618"
Community content is available under CC-BY-SA unless otherwise noted.