Gone With the Song 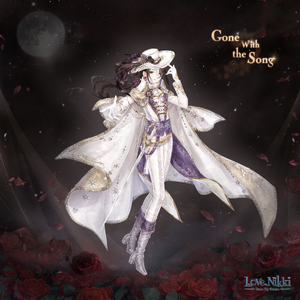 Gone With the Song
30

Gone With the Song is a Festivals suit that could be obtained during the Lie of Moonlight event.

Completion Prize: A Styling Gift Box containing Gone With the Song and 30

Cold moonlight falls upon the music score. Under the notes are countless secrets, but nothing could stop him.
– Shadow of Night Sky

What's hidden under beauty is always dangerous. Actually, he's a phantom thief taking the disguise of a singer.
– Silver Star


Cecil's voice caught Earl's attention. He was invited to the castle as a guest and received many praises.
– Gem Moonlight


In the late night, Cecil was investigating in the silent castle. The gem collected by the earl is his target.
– Thrilling Night


Who would know there is a cellar here in this luxurious castle. And inside there is a girl under the moonlight.
– Kiss of Age


The life and the world he's too familiar with turns out to be something beyond reach for the girl.
– Night Feathers


However, the countess's decision to marry her with the lord broke her usual life. She shed tears as he sang for her.
– Void Fantasy


The subtle compassion made him sing for Luya. It's a tender encounter under the moonlight.
– Wandering Singer


Maybe the moonlight reflected in the girl's eyes is too brilliant. The phantom thief somehow wants to take her away.
– Moonlight's Lie


The phantom thief who got the gem in his hand was caught on the road to the cellar. He failed to take her away.
– Pure Vision


Who stood in the moonlight is now devoured by darkness. In the pain, he wrote Moonlight's lie for him and Luya.
– Unknown Ballad


The little cellar stands no challenge for the phantom thief. Where did he go? Maybe the answer is in the song.
– Gone With the Song

Gone With the Song is about Cecil, a phantom thief disguised as a singer. He was invited to an Earl's castle as a guest, receiving many praises. However, his objective was to steal the Earl's gem. Investigating the silent, luxurious castle at late night, he stumbled upon a cellar, and inside, he found a girl, Luya, under the moonlight. Cecil felt a subtle compassion towards Luya, as their lives were worlds apart and for Luya, his world was something beyond her reach. As contextualized in Dark Night Moonlight, she was engaged to a senile lord by the countess' decision, who claimed that it was her only worth as a bastard's child. Thus, in the pain, he wrote a ballad for both of them, calling it "Moonlight's lie." As he sang it to her, she shed tears, making their encounter a tender one. The way the moonlight reflected in her eyes almost seemed to brilliant; it made him want to take her away. However, on his way back to her after taking the gem, he was caught red-handed, failing to take her away.

A post from the 浮光镜界 (Realm of Reflections) event (unreleased on the International server) revealed that the story of Luya and Cecil was a play by the December Troupe.

Retrieved from "https://lovenikki.fandom.com/wiki/Gone_With_the_Song?oldid=160364"
Community content is available under CC-BY-SA unless otherwise noted.