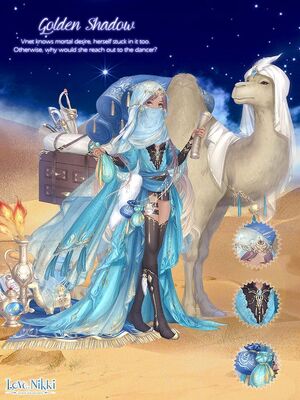 Vnet knows mortal desire, herself stuck in it too. Otherwise, why would she reach out to the dancer?

Golden Shadow is a Wasteland suit that appeared in the Desert Mirage Event. At the same time, a Time Limited Quest From Momo was held which allowed the player to obtain this suit, Phantom in Desert and Spring of Desire. The suit can now obtained through Recipe Crafting.

Completion Prize: A Styling Gift Box containing Abyss of Temptation, Abyss of Desire, Desert Legend, Quicksand Phantom, Cause of Past, Promise of Past, Fruit of Past, and 30

That Mirage Tower only exists deep inside the desert. Under sunset, it seems that the time has stopped.
– Dusk Pavilion

Her name is the secret of the desert. Vnet and her mirage attract people like magic.
– Divine Name

Abruptly in the desert appeared a glamorous tower. An exotic girl grins in front of it.
– Rose Gauze

Vnet saw too many trades. Some were happy, some regretted. Only Goddess of Gold is always calm.
– Unfinished Will

In the vast desert, I come for you... You will fulfill your wish, and I will get what's equal.
– Gilt Word

She exists for too long. Countless years passed like sand in the hourglass. Only the old ballad passed down.
– Old Ballad

The roaring sand makes people cannot see. The touch of blue is like the sky or a clear water.
– Clear Sky and Water

The most famous dancer danced for her. The jade on her waist kept ringing. Yos obviously likes the treasure.
– Shiny Gold and Jade

She collected too many souls, but her most beautiful treasure is the stunning dancer--Yos.
– Stunning Treasure

Her left hand holds an ancient map, and her right hand holds a heavy pouch filled with treasure.
– Desert Surprise

She generously gives out treasure and harvests souls in the meantime. Some fear her power, more covet fortune.
– Desert Fate

Once, there was a boy who wanted to trade for dragon scale. Vnet smiled and opened a box beside
– A Moment of Past

Everyone has his story and hope. Fortune and treasure tempt people like an abyss.
– Abyss of Temptation

The sunlight etched the mark of time. The wind blows and the story of Vnet goes on till it becomes a legend.
– Desert Legend

From deep inside the desert came the sound of camel bell. It's the sound that Goddess of Gold leaving.
– Quicksand Phantom

Vnet knows mortal desire, herself stuck in it too. Otherwise, why would she reach out to the dancer?
– Abyss of Desire

The boy talked about the trade, 'My dragon is too old and he misses the scale he lost.'
– Cause of Past

Then what will you offer? The boy hesitated and promised to come back, and he did.
– Promise of Past

The trade usually requires a lifelong prison. Some may regret but their cry would last a blink.
– Fruit of Past

The suit describes Vnet, the Goddess of Gold. She has lived for a long time, appearing in front of people in the desert within her Mirage Tower and granting their wishes. According to the event, she has the capability to look through people's minds in order to see their desires. However, when she grants their wishes, it comes at the cost of them having to live in the Mirage Tower, forever part of Vnet's "collection". She reaches out to the dancer, Yos, who only danced because she wanted money. Already feeling trapped by her current situation and tired of dancing, Yos agreed, even though it meant she gave up her freedom. Vnet also traded with a boy who wanted a dragon scale, for his dragon which was old and had lost one of its scales. 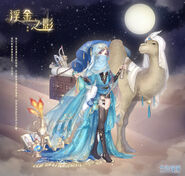 Retrieved from "https://lovenikki.fandom.com/wiki/Golden_Shadow?oldid=145681"
Community content is available under CC-BY-SA unless otherwise noted.