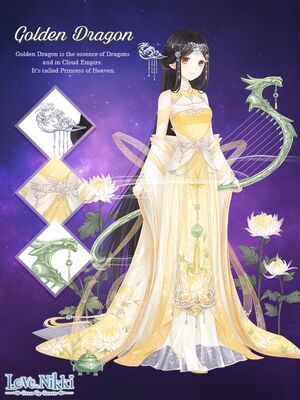 Golden Dragon is the essence of Dragons and in Cloud Empire. It's called Princess of Heaven.

Golden Dragon of Neck (previously called Golden Dragon) is a Stars suit that appears in the reoccurring Star Secrets Event.

Back to Stars suits

The position in Seven Constellations is Venus with totem Dragon, so it's also called Golden Dragon.
– Golden Dragon


The palace in the mist is like a fairyland. Even fairies cannot resist its charm.
– Foggy Palace


The divination shows a dragon flying in the sky. It's the symbol that the new emperor is to come.
– Dragon Hairpin


Princess loves playing instrument most. She would play this Zither when a new month comes.
– Dragon Zither

Retrieved from "https://lovenikki.fandom.com/wiki/Golden_Dragon_of_Neck?oldid=160944"
Community content is available under CC-BY-SA unless otherwise noted.