Glittering Star is an Apple suit that appears in the Dawn Front Event.

Lin was alert when she entered the dance floor. There were ferocious undercurrents beneath the peaceful surface.
– Snow Bird in Sky

Leaving the prison, she dives into this luxury. In a trance, Xinglin mistakes the black figure as her teacher.
– Glittering Star

Though mostly favored, Xinglin never knows the true purpose of the research. Such secrecy made everything dubious.
– Sentimental Flower Song

When she had time, Xinglin kept searching for the clues. In locked tower, she went through all the dusty materials.
– Morning Fading Stars

When Xinglin peeked the secret, the world collapsed. She tries to protect those around her as Nightingale did.
– A Glimpse of Secret

The order was surrounded by endless chaos. Some people sought for light, but some preferred darkness.
– Lost Wings

Lin wanted peace, but Nightingale liked chaos. When the curtain lifts, ugly scars declares the end of the past.
– Parted Ways

She broke up with her mentor for her friend. What will happen to this lonely bird with no shelter?
– Chick under Moonlight

She was once regarded as the best researcher and the successor of Nightingale, always able to solve a dilemma.
– Light of Order

Shade hid beside the staircase. When the White Dress attracts everyone's attention, he disappears into the crowd.
– Stairs of Destiny 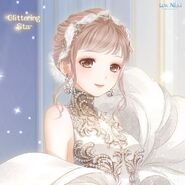 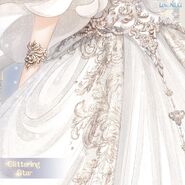 Retrieved from "https://lovenikki.fandom.com/wiki/Glittering_Star?oldid=113650"
Community content is available under CC-BY-SA unless otherwise noted.