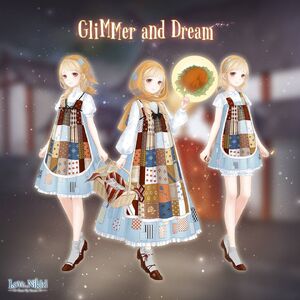 Glimmer and Dream is a Troupe suit that can be obtained through evolution of parts which drop in Princess mode of Chapter 18. It is also customizable.

Back to Troupe suits

She finally received Cicia Design School’s letter of admission. During the opening ceremony she was both excited and nervous.
– School Braid


Why are my classmates' designs this cute? She noted down every single word, and tried her best to keep up with the class.
– Blue Wish


At night she took out her Filofax and reorganized he notes, then she penned out her dream clothes on a piece of patterned paper.
– Collage Dream


The school is holding a theater play competition in honor of Mr. Haiden. She checked, but couldn’t find any suitable roles.
– Soft Warm Socks


She thought about playing a princess or a queen, but it's not what she wants. At night she began to pen down her theater play.
– Courageous Step


She decided to prepare the props herself. She modified the scarf many times before she finally satisfied was with the result.
– Orange Mood


‘My play is called ‘the little match’s dream’.’ Someone made fun of her. But she spoke the name of her play in a loud and voice.
– Box of Matches

Her only wish was to be admitted to Cicia Design School. Now, she wishes that her play be played at the Grand Theater at Cicia.
– School Braid-Gorgeous


She put up posters, but no one came. Everyone want to be a princess or a prince; who want to be the companion of a little match?
– Blue Wish-Gorgeous


She designed a one-piece dress for the little match in retro collage style, it seemed as if one was dressed with the past.
– Collage Dream-Gorgeous


‘I really like your script and your designs.’ A senior student of the theater club said: ‘but, people don’t like such stories.’
– Soft Warm Socks-Gorgeous


Girls yearns to wear magnificent dresses, but working hard is more important. She hugged her script and went into the club.
– Courageous Step-Gorgeous


‘…… But I’d still like to try.’ In a flurry she received the script and ran from the theater club to the music club.
– Orange Mood-Gorgeous


‘The only thing I have is this box of matches. But if I light all of them at once, I too can see the radiance of the sun.’
– Basket of Matches

Her efforts had born fruit, and students joined her play. They discussed the script, and laughed merrily as they rehearsed.
– School Braid-Treasured


This morning the senior also came. He looked a little bit nervous. ‘Are there......any roles which would suit me?’
– Blue Wish-Treasured


When the improved collage was shown it was received with splendor; it felt as if a wind blew through the school like a wave.
– Collage Dream-Treasured


The cute senior was dressed as Father Christmas; it fit him well. In the play, he will bring hope to the little match.
– Soft Warm Socks-Treasured


The little match began in solitude, and ended in thunderous applause. She bowed deeply as tears silently fell down her cheeks.
– Courageous Step-Treasured


After the play, she tidied up the props with everyone backstage. When she left, the senior student was waiting for her.
– Orange Mood-Treasured


‘After all this hard work, let’s have dinner together. ...Okay, seeing you on the stage makes me think of roast chicken.’
– Big Basket of Matches

During school admissions, he will remember the cute and brave primary school girl he saw at that opening ceremony.
– School Brad-Memory


He still remembers the script she hugged as she ran into the theater club. Her sincere script reminded him of his past self.
– Blue Wish-Memory


In his home there is a piece of old collage clothing. But in her hands, retro design radiates with a new kind of brilliance.
– Collage Dream-Memory


Becoming president of the club means responsibility. He can’t create whatever his heart desires, but he believes that she can.
– Soft Warm Socks-Memory


She wouldn’t easily give up so easily, right? When he walked past the rehearsal room, he heard laughter from within.
– Courageous Step-Memory


He asked her whether there was a role for him. But was too late, and could only take on the role of the cute Father Christmas.
– Orange Mood-Memory


‘‘The little match’s dream’, sounds very tasty!’ ‘Momo, honestly. The only thing on your mind is eating roast chicken!’
– Big Basket of Matches-Memory

The suit and its recolor 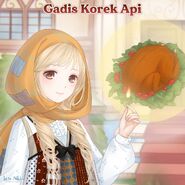 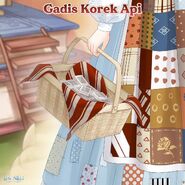 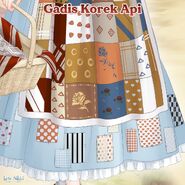 Retrieved from "https://lovenikki.fandom.com/wiki/Glimmer_and_Dream?oldid=161865"
Community content is available under CC-BY-SA unless otherwise noted.