Look up into the sky. It looks so tranquil but also glittering and charming.

. Completing this suit will grant the player the Stellar Atlas suit.

Renee often looks up at the starry sky, wondering what's behind it. A curtain? A canvas? Though they are thousands of miles away, sometimes it feels like they are just beyond reach. They can be seen, but never touched. Clothes dotted with stars are as fascinating as the night sky; aside from bows and hearts, the most popular element of Lilith women’s apparel are the stars themselves.

When night falls, Renee likes to lay upon a grassy knoll and feel the autumn breeze as she stares up at the vast Milky Way; even if she were to spend every night like this, she would never get bored of it. The sky changes every night, and the stars shine with a different kind of beauty with each passing second.

One night, a comet streaks across the sky, leaving a long, glowing tail in its wake. Renee is immediately enraptured by it; this is the first time she’s ever seen a comet! It is more beautiful and moving than a shooting star, but it was gone too soon. Renee deeply reveres the starry sky and so she often looks up at it, but what she truly desires is to seize them; to attain their power, soar up into the heavens, and pluck every last one out of the sky for herself.

It has always been her fantasy, taking priority even over her love for matching. She goes to the observatory every day, the starting point for her march on the stars, and begins conducting meticulous research on their positions and movements. She studies the vast galaxies fervently, hoping she will unravel the mystery of the starry skies.

Ever since, a rumor begins circulating around the Lilith Apparel School. When night falls, the gates of the underworld open within the observatory, and a ghost haunts the grounds until the morning comes, constantly emitting a faint glow...

Only two things in the world attract me, the lofty morality and vast starry sky.
– Dawnstar

Look up into the sky. It looks so tranquil but also glittering and charming.
– Stargaze


The galaxy is so vast that even a big discovery seems to be so insignificant.
– Galactic Classics


The starry sky was so charming to Renee that every night she will lie down and watch it to sleep.
– Splendid Galaxy


As time goes, the stars never cease moving. Renee never gets tired looking at it.
– Day and Night


When the comet passes, it took Renee's heart away. She wants to seize it not only in memory.
– Polestar Glasses


Observatory appears in the mind of Renee. She just wants to watch the stars using the telescope.
– Star Grass


Renee decides to explore the secrets of the stars. The urge has taken her.
– Star Atlas Manual


It's said that every star stands for one person on the earth.
– Arch Brows

The suit describes a Lilith girl named Renee, who used to wonder about the night sky and look at it every night. One day, she saw a comet for the very first time, and became obsessed with looking at the stars and studying them in an observatory, hoping to "unravel the mystery". Meanwhile, inside the Lilith Apparel School, a ghost roams the grounds "emitting a faint glow". 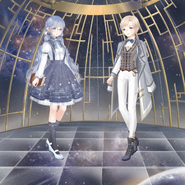