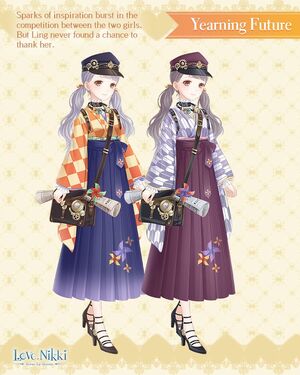 Sparks of inspiration burst in the competition between the two girls. But Ling never found a chance to thank her.

Future Capriccio (also known as Yearning Future) is a Cloud suit that can be obtained through crafting. The suit can also be customized.

The collision between Cloud and Pigeon opens a magnificent and romantic era.
– Future Capriccio

Ling is a famous inventor in Cloud Empire, but she is still pursuing more innovative designs.
– New Fashion

When in school, there's a cute dwarf girl in Ling's class. To catch up with this rival, Ling creates many inventions.
– Gear Memory

Sparks of inspiration burst in the competition between the two. But Ling never found a chance to thank her.
– Sudden Impulse

Ling met the airship in North. I'm Debbie, the No.10 stylist of Iron Rose! Defeat me if you want to get onboard!
– Brass Goggles

Standing on the gangway ladder, Debbie wears her scholar robe just like before. Somehow, she looks very cute.
– Gear Satchel

The gift is a surprise for this day. Running to the airship, Ling called out Debbie's name. We will reunite!
– Multi-functional Staff

Ling has realized her love for steam machinery since student times, so she went to Pigeon for further study.
– Future Capriccio - Memory

However, Debbie turned her life upside down. When she was crushed by Debbie, she struggled to grow up.
– New Fashion- Memory

Ling was no longer complacent. She challenged Debbie and many gears were invented during this competition.
– Gear Memory - Memory

Proud Ling regarded Debbie as her opponent, but the dwarf has already seen her as the only friend.
– Sudden Impulse - Memory

When designing a new type of goggles, Ling ran into many problems. When she was at a loss, Debbie helped her.
– Brass Goggles - Memory

Ling specially made Debbi this delicate handbag. But before the gift is sent, Debbi quit the school.
– Gear Satchel - Memory

The gift is a surprise for this day. Running to the airship, Ling called out Debbie's name. We will reunite!
– Multi-functional Staff

The suit describes an inventor called Ling, who is from the Cloud Empire. During her school years, she was in the same class as Debbie, who became her academic rival. Ling and Debbie always tried to outdo each other, though Debbie regarded her more as a friend. Because of her Ling made lots of progress in her inventions - Debbie even helped her design a new type of goggles. As a gift, Ling created a handbag for Debbie; however, Debbie quit school and Ling never got the chance to thank her.

Ling later went to Pigeon to study more, wanting to pursue more innovative designs, especially that of steam machinery. She ended up meeting Debbie in North on her airship. Ling ran towards the airship and called out Debbie's name, happy to finally reunite with her and give her the handbag.

Retrieved from "https://lovenikki.fandom.com/wiki/Future_Capriccio?oldid=136192"
Community content is available under CC-BY-SA unless otherwise noted.