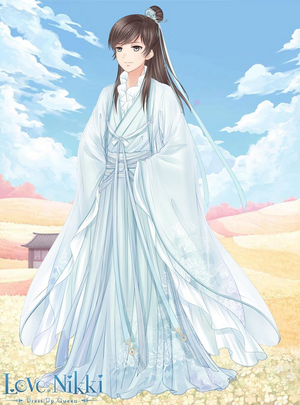 Fu Su is a character in Love Nikki. He is a designer from the Cloud Empire.

Fu Su is a man with a strong face, long brown hair, and green eyes. His hair is tied up in a blue ribbon and he wears flowing blue clothing typical of Cloud.

When he first appears to Nikki and Co. in the Flower Field, he takes on the appearance of a country boy, with shorter hair, soft, light colored clothes, and a basket of flowers on his back.[9]

Fu Su is mischievous, first pretending to be a simple chopper who lives in the mountains.[9] It is only after passing the various tests of the Flower Field that he reveals himself to be an experienced designer, the disciple of the late Ancient Pavilion Designer. He admits that he has been stuck in his ways for a while, living in the pavilion for years and years, but that it is time for him to move on and change.[1]

Fu Su lost his parents when he was young, becoming an orphan. He raised himself with the assistance of a deer called Bambi. The deer taught him styling through displaying the patterns on its skin, its antlers and hooves, and the vigor of nature.[4]

Fu Su became a hardworking pupil of the Ancient Pavilion Designer for many years, and formed a strong bond of friendship with Winter. Though he tried hard to focus on the work set upon him by the Designer, Winter convinced him one day to go out for a walk.[12] They climbed Mount Mango and admired the peach blossoms.[13]

When he told her it was time to go back, she scoffed at him and wondered where the boy who sold fake esoterica went. He gently explained to her that he was only doing it to make money to live since he was an orphan, and said that he was lucky that the Designer took him in. He did not take his kindness and hospitality for granted.[14]

They met the deer that raised Fu Su while they were walking, and the deer led them to a beautiful part of the forest. Fu Su asked Winter what she thought beauty was.[15] When he tried to explain his own thoughts, the Ancient Pavilion Designer appeared behind them and joined in their conversation, not bothered by the fact that they had sneaked out of the pavilion.[16]

During this year, King Sayet passed away and the Nine-Day War occurred,[17] though Fu Su did not hear of at least the former and possibly the latter until the Ancient Pavilion Designer told him. The Designer asked him to go to Pigeon Kingdom for him to pay respects, revealing that he and King Sayet had been close.[18]

Fu Su went the next day to do so, and arrived, only to find that his master's health was declining. When Fu Su asked him what was going on, the Designer urged him to leave the pavilion, saying that it caged them in. However, Fu Su, ever loyal to the Designer, refused to.[18]

One day while collecting herbs on Mount Mango, Fu Su sees the deer again. The deer bleats sadly at the pavilion, and Fu Su gets a feeling that it's trying to tell him something. He returns to the pavilion to find that the Designer passed away. Fu Su put his body on a bamboo raft and sent it down the river, obeying his master's last will. However, he continued to stay in the Ancient Pavilion.[18]

When Nikki and her friends visited the Flower Field, Fu Su masqueraded as a plain boy, unbeknownst to the visitors,[9] but later admitted to them that he was actually the apprentice of the late Ancient Pavilion Designer. After he saw Nikki's styling skill, he was finally inspired to join society again after living in the pavilion for approximately fifty years.[1]

Sometime after this, Lunar sought out Fu Su for help in constructing her Stringless Guqin. She needed the main beam from a century-old house, as she did not know where to find the preferable alternative, a Sacred Tree nurtured by nature,[19] and she thought the Ancient Pavilion would suffice. However, she was unable to find him at the Ancient Pavilion.[20]

Fu Su found her instead while she was in Moonlit City, as he wanted to buy fabric from her. She told him of her request, but as an alternative to using the beam from the Ancient Pavilion, he knew something about where to find the Sacred Tree.[20]

They went to Tai Chi Mountain, where Fu Su knew the owner of the temple through the Ancient Pavilion Designer. He had heard from the temple owner that there was a phoenix tree on the mountain that was over a century old, and it likely had a suitable branch. Fu Su told the temple master of Lunar's request, and the temple master not only granted her a branch, he gave her advice.[21] Lunar did not understand the advice, but Fu Su told her that she had to understand it herself if she wanted to succeed.[22]

He stayed with the temple master for a few days, and at some point went to visit Lunar again once she had finished constructing the guqin, but she could not produce any music.[22] After she finally learned to play it using her heart, she invited him back to Moonlit City and played him a song.[23]

After this, Fu Su attended the Fantasy Styling Contest with Winter, and saw Nikki again.[24]

In Jinlin Palace, Fu Su visited the Cloud Empress. Fu Su was covered in blood, and the Empress was worried about their position in the war. Fu Su told her not to worry about him, and told her she must stand on the round platform and recite the words Bai Yongxi taught her. He reassured her that Yue Qianshuang would win in the end and that there was nothing to worry about.[25]

Before the ceremony commenced, Fu Su stroked her face with a blood-stained finger. When she recited the words, her face lit up.[25] It is possible that Fu Su's blood could have had an effect on the ceremony, or that it was necessary for it to work.

Fu Su first meets Nikki in the Flower Field, and later tells her that she inspired him, helping him come to the decision to leave the pavilion and improve as a designer.[1]

Autumn describes Fu Su and Winter as "the best of friends, always hanging out together".[26] When Nikki and her friends meet Winter, they finds that Winter is unwilling to let Fu Su travel beyond the pavilion, afraid that without him she'd have nobody to play with.[27] Eventually they manage to convince Winter that he should leave, though Winter still wishes to go with him.[1] Fu Su is later seen traveling with Winter after leaving the pavilion[24]. However, at some point after this, they part ways.[28]

Fu Su was the Ancient Pavilion Designer's disciple.[1] He passed the tests of the Flower Field Fairies, allowing him to become a student under the Designer. He studied under him for decades.[4]

Fu Su took care of the Flower Field after the Designer's passing. It is implied that he did not tell anyone, or many people, about the Pavilion Designer's death, given that Lunar did not know he had passed.[29] The Designer wanted Fu Su to leave and broaden his horizons, but Fu Su believed that by staying in the pavilion, he would be able to inherit the Designer's will and become a great designer.[1]

The Cloud Empress trusts Fu Su greatly, and they are shown to have a deep friendship. When Fu Su appears hurt, she worries about him. He reassures her worries and calms her down when she is panicking.[25]

Retrieved from "https://lovenikki.fandom.com/wiki/Fu_Su?oldid=109525"
Community content is available under CC-BY-SA unless otherwise noted.