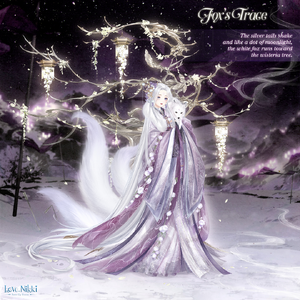 The silver tails shake and like a dot of moonlight, the white fox runs toward the wisteria tree.

Fox's Trace is a Cloud suit that could be obtained via a Lucky Bags draw.

The old city hasn't snowed in years. It seems it has gone with the elapsed time, only leaving some traces behind.
– Old Snow

The purple lady has become a topic on the street. It's said she leaves fox's footprints on the snow as she walks.
– Green Snow

The old master once visited the lantern fair just like this before. The fox skin she wore protected her from cold.
– Meet in Dream

Late night but early spring, the old Long Street filled with festive lanterns is like a dragon shining at night.
– Long Street Tour

In the lantern fair, there is a lady in purple clothes whose hairpin is decorated with wisteria like light fog.
– Empty Sigh

The old Long Street in snow is lit up by golden light. In the bustle, nobody notices the lady's fox shadow.
– Gold and Jade

The silver tails shake and like a dot of moonlight, the white fox runs toward the wisteria tree.
– Moonlit Water

The past in the fog has gone blurry but the joy at this moment feels real. She enjoys the fireworks tonight.
– Firework in Fog

In the old mansion, the purple lady reveals her tail, satisfied with her ability to morph her master's appearance.
– Innocent Fox

The wisteria tree has witnessed all the turbulences as the old master left and wept a flower as its teardrop.
– Falling Wisteria

From the downcast sky, snow pellets fall onto the dilapidated parapet wall, covering all the scars with purity.
– Flowing Graupel

White fox looks at the ancient city. Her clear eyes are like the deep sea, burying all the scars and memories.
– City of Frost

As the warm spring comes, the last bit of frost on the vine turns to clear water. Another cycle begins.
– Last Frost

As the title indicates, Fox's Trace is about a white fox who leaves fox footprints on the snow. She shapeshifts as a lady in purple clothes and wears a hairpin decorated with wisteria, which resembles the light fog. She watches over the lantern festival which shines like a dragon at night in Long Street, and as the snow there is lit up by golden lights, nobody notices the fox lady's shadow in the bustle.

She revealed her tails when she arrived at the old mansion, satisfied with her ability to morph her master's appearance. She and her old master used to visit the lantern festival together, but by now, her master was long gone. The master left in front of a wisteria tree which had witnessed lots of turbulence. The fox had ran towards the tree, and instead of crying tears, it had wept a flower for them.

Even though the fox's memories of her past had gone blurry, she enjoyed the fireworks that night. Snow fell onto the dilapidated parapet wall, covering all the scars on the wall with purity. As she looked at the ancient city with her eyes clear like the deep sea, she buried all of her own scars and memories.

As the warm spring comes, the last bit of frost on the vine turns to clear water, and thus, another cycle begins.

In the present day, however, the old city hasn't seen snow in years. It seems it has gone with the elapsed time, and the only things remaining are traces left behind.

It is unknown which Long Street the story takes place in, but based on various descriptions, it most likely refers to the Long Street in Cloud Capital. 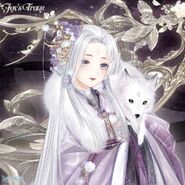 Special background.
Add a photo to this gallery

Retrieved from "https://lovenikki.fandom.com/wiki/Fox%27s_Trace?oldid=146185"
Community content is available under CC-BY-SA unless otherwise noted.