All the residents were forced to move to other towns. Cruelly trampled by soldiers, the flowers withered.

She's an adopted child. It's said that her foster father found her in a wolf den when he collected herb in forest.
— Young Girls in Forest

There are wild wolves in the forest, but they are very tame before her and often play with her.
— Branch Pattern Gauze Dress

It's a small town on the border of Pigeon Forest where a slate road connects the houses of friendly people.
— Fine Gauze Cloak

One day, a traveller came to the town. With a big bag and dusty windbreaker, he came from another world.
— Plain Strap Sandals

She's a special girl. It took very long for her to learn to talk, and she spent a great amount of time in forest.
— Wild Flowers in Mountains

The residents are very hospitable. They look after homeless little animals and plant flowers at their doors.
— Beast-bone Necklace

Growing up in this town, she knows every townsman, and even can remember the name of her neighbor's sheep.
— Plain Corset

A guest came to her house. She told him to stay away from the forest for there were wild wolves there.
— Gentle Lady

However, the traveler now knows her secret in the forest. Though he promises to tell nobody, she is still worried.
— Flower Pattern Gauze Dress

So the townsmen welcome him. They help him build a little house and plant flowers at his door too.
— Bowknot Ankle Boots

Ignoring her advice, the traveler went into the forest alone and she rescued him before the wolves harmed him.
— Jungle Rose

The traveler stays. His trip has ended. He likes this town where he can wake up in chirps and greet everyone.
— Platinum Necklace

The traveler has gone to countless places, but only this place and this girl make him feel at home.
— Elegant Corset

After the traveler settled down in the town, he went to the forest with her a lot. Gradually, the wolves trust him.
— Goddess of Forest

All the people here are forced to leave and their flowers are trampled by the soldiers.
— Leaf Pattern Gauze Dress

The townsmen don't want to leave too. This place is their home and the flowers and birds here are their friends.
— Velvet Cloak

But the traveler never returns. Some say the duke has granted him death. She sets off to look for him.
— Bowknot Thigh Boots

Later, a duke finds this place to his liking and plans to build a castle and plants roses for his future wife.
— Palace Rose

The duke sends gold and then a warning. The soldiers think the wolves around are dangerous and hunt them down.
— Dark Brown Wolf Ears

After summers and winters, after barren deserts and bustling cities, he finds this place and doesn't want to leave.
— Pure Gold Necklace

Illusive wolf howls passed over from afar. The moonlight shines down and her shadow on the ground gradually shifts.
— Embroidered Corset

On the wedding day, all the elites in the city came over. However, before that, nobody noticed the bride.
— Goddess of Palace

The feast seems too noisy for the bride. She leaves the dinner quickly and leaves the Duke alone with all the guests.
— Flower Pattern Dress

Duchess wears a red cape on the wedding as if to match the red moon in the remote sky.
— Red Velvet Cloak

What then? Momo asks impatiently. 'Later, the duke palace was attacked by wild wolves and thes duchess was lost.'
— Bowknot Thigh Boots - Brown

Duchess wears a yellow daisy, covering her beautiful face in the white veil. Nobody noticed that unbecoming flower.
— Yellowish Daisy

When the guests left, the drunk duke returned to the room. But under the bride's veil was a strange face.
— Ashen Wolf Ears

She removed the necklace. It's not a jewel but a sharp dagger dipped in deadly poison.
— Pure Gold Necklace - Tassels

Illusive wolf howls passed over from afar. The moonlight shines down and her shadow on the ground gradually shifts.
— Embroidered Corset - Brown 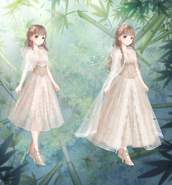 The Base and Rare versions of the suit.