For the vows of love 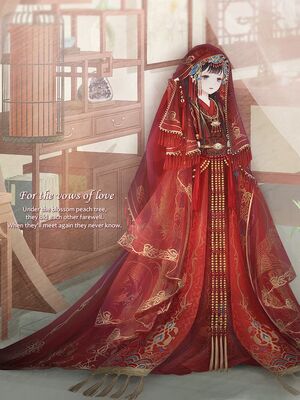 Under the blossom peach tree, they bid each other farewell. When they meet again they never know.

For the vows of love is a Happiness suit that can be obtained from the Honeymoon Holyland Event. It was added together with Oath of Flower Rain for the second season on December 3rd, 2017.

Back to Happiness suits

Under the blossom peach tree, they bid each other farewell. When they'll meet again they never know.
– For the vows of love

When two names are united by marriage, a vow is made, and a life bound together is blessed.
– A Gentle Caress

The nuptial vow to be together till forever is as clear as written on paper.
– Nuptial Vow

It's been a long time since she heard from him last time. When will he come back?
– Eternal Love

The moment she saw him, she thought it must be an illusion until the voice says: I'm back for you.
– Red Phoenix Coronet

Are you willing to go to borderland with me? To stay away from all this hustle and bustle.
– Oath of Red Leaves

Every girl in the Cloud Empire waits for their day: to dress up, to make the vow with their prince.
– Lovers' Pendant

On the wedding day, she looked back to the Cloud town, she knew she may never come back again.
– Part Forever

The descriptions attached to the parts of the suit tell the story of a young couple from the Cloud Empire, who know and love one another from childhood. The man leaves after one last meeting under a peach tree and the two spend several years apart, with the woman waiting for his return and almost losing hope of seeing him again. When he comes back to his girlfriend, he asks her if she'd marry him and leave their bustling town to go to the border and build their own lives there; she accepts, marry following the traditional Cloud wedding rites (reminiscing old Chinese weddings) and then tearfully leave their home behind.

Retrieved from "https://lovenikki.fandom.com/wiki/For_the_vows_of_love?oldid=145598"
Community content is available under CC-BY-SA unless otherwise noted.