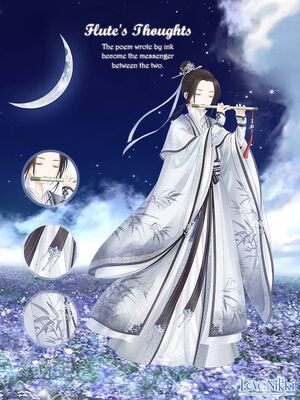 The poem wrote by ink become the messenger between the two.

Flute's Thoughts is a Story Suit that can be obtained by completing the suit Lantern Wish.

As the Harvest Festival draws near, Vane’s preparations leave him with very little extra time to spend with Emmy. Emmy, wiping away the tears she’s been holding back for many days, decides to confront her mother and tell her what has been on her mind; even though she knows it might result in nothing, she doesn’t want to miss her last chance before she leaves. Her mother has been very supportive of her; with her help, Emmy finally managed to secure a place on the Harvest Festival performance, playing the role of a common woman alongside Vane.

During the day, the celebration is extraordinarily lively. Hooking her arm though Vane’s, Emmy explains she is afraid of losing him in the crowd, but her blushing cheeks reveal her inner joy.

'You dummy, when are you gonna figure it out?’ she thinks to herself as she takes a bite of some candied fruit. Noticing the glaze smeared all over Emmy’s mouth, Vane bursts into laughter; Emmy, unaware of his reason for laughing, looks at Vane’s mirthful face and says, “You have such a cute smile; why do you always walk around with such a serious expression?” The tactless girl’s unintentional suggestion makes Vane blush.

As the warm, autumn sun dips behind the green hills along the horizon, Vane and Emmy depart from the crowded streets and arrive at Green Slope, just outside of town. The flowers of summer bloom as butterflies and fireflies dance around one another, signaling for the night winds to come.

The sky is streaked with stars. Emmy picks up a pen and writes a quick poem down on a destiny lantern, confessing her affection. She stops writing, and looks up to see a stunned Vane standing next to her. But when she sees the surprised and relief in Vane’s eyes, she understands what it means, and smiles… It looks like he’s figured it out, and we both feel the same.

Love is like the heavens, and this lantern carries their fate into the sky along with it. The soft wind, the bright moonlight, the happy chatter in the background, and a song of lovesick nostalgia; all of them tell of a love story between two hearts full of admiration. To love and protect, till death do they part.

As a member of this noble family, he wields a pen as well as a sword.
– Vane

Vane gave her this flute as the companion when he was away.
– Wispy Flutes

Vane doesn't know too much about little girl's thinking, but he just cherishes the time with her.
– Brilliant Blossoms

The poem wrote by ink become the messager between the two.
– Flute's Thoughts

Vane doesn't know how to express his joy, but the only word is his faith to protect her.
– Bamboo Shoes

She said, every time she heard the flute, she feels like floating among the clouds.
– Flute of Pleasure

The man looks so gentle and virile in his youth.
– Jade Elegance

With the suit Lantern Wish
Add a photo to this gallery

Retrieved from "https://lovenikki.fandom.com/wiki/Flute%27s_Thoughts?oldid=135609"
Community content is available under CC-BY-SA unless otherwise noted.