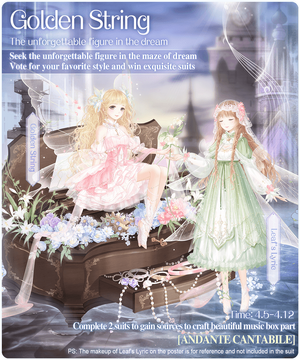 The Golden String event was an event that ran from April 5th to April 12th, 2019.

Players were shown two or three characters each day. Choose your favorite to gain

(Dream Keys). Exchange the Dream Keys for pieces of the suits Golden String and Leaf's Lyric. Completing both suits will give the opportunity to craft the item Andante Cantabile, and the recipe for the item is given in the Styling Gift Box for Golden String.

Voting ten times at once gave the player the opportunity to have a short dialogue with the character. There are five dialogue prompts and two choices for each. The dialogue prompts cycle through in order and are not random.

Each day a new set of characters were shown.

Group A competed and Lunar won.

Group B competed and Sofia won.

The semifinalists from Groups A and B competed, and Sofia won.

The semifinalists from Groups C and D competed, and Yue Qianshuang won.

Retrieved from "https://lovenikki.fandom.com/wiki/Flowing_Garden/Dream_Palace?oldid=123299"
Community content is available under CC-BY-SA unless otherwise noted.