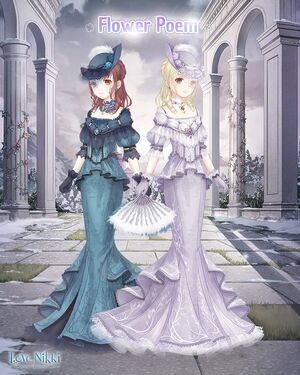 Flowers Poem is a Pigeon suit that appeared in the Flowing Garden Event.

There is a romantic song in the fragrance of flowers. Louise corrects her hair and walks toward the garden.
– Soft Golden Laurel


It's the flower fair at Roland's Manor, where young men wear new riding suits to attract girls.
– Lost in Iris


Louise's heart was not up to the words of the young men. When dad was busy, she found an excuse and left.
– Roland's Whisper


Fed up with the smell of perfume and withered flowers, Louise sneaks out of the manor.
– Purple Rose Hat


She likes wild roses, mignonettes, and violets. The flower language sent by forest wind is her favorite.
– Feather Dream


Louise stopped by the Iris sea. when she approached it, she was pinned down by a feathered arrow.
– Silky Gloves


The girl with a longbow in her hand stares at Louise. She is flexible, vigilant, an elf obviously.
– In the Name of Flower


Louise was shocked by her stern gaze, yet the elf put back the bow and conjured an iris from nowhere to give her.
– Chansons Love Poem

A handsome boy attracted the whole Roland Manor. Louise wanted to refuse him but no one cared.
– Warm Palm Laurel


Wild roses no longer bloom, and the violets are singing bitter songs. Louise trots to the bank full of irises.
– Lost in Iris - Hidden


The iris is swaying in the wind blowing from the valley, but Louise cannot find the elegant figure in her memory.
– Roland's Whisper - Hidden


Louise's mind is changing. She only has one little dream but with no one to talk about.
– Blue Rose Hat


I remember you. I remember your rambling figure and your verses. It is the voice in her dream.
– Feather Dream - Hidden


As the daughter of forest and valley, she shouldn't have exposed herself to a man, but she cannot forget her eyes
– Silk Gloves - Hidden


‘You shed tears on these flowers, just as I sigh for your sorrow.' She took Louise's hand as if holding an iris.
– In the Name of Flower - Hidden


Wind is whispering the flower language of spring, but what I'm waiting for is your message.
– Chansons Love Poem - Hidden

Retrieved from "https://lovenikki.fandom.com/wiki/Flowers_Poem?oldid=182696"
Community content is available under CC-BY-SA unless otherwise noted.