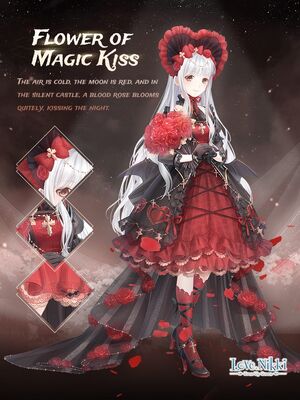 The air is cold, the moon is red, and in the silent castle, a blood rose blooms quietly, kissing the night.

Flower of Magic Kiss is a Lilith suit that could be obtained from Lucky Bags from September 25th to October 12th, 2018.

I heard moonlight should be silver-white, but it's all dark red outside. They said it's because of tears.
– Flower in Night

As the sand of time drops, the blood rose cannot escape the fate of perishing.
– Flower of Holy Cross

I fondled a blooming blood rose. The dark thorn pierced my fingertip, but I felt nothing as I'm but a puppet.
– Blood and Thorn

Farnell, a name that should be free. But now I can only wait for the next frost age by the pitch-black coffin.
– Contract of Freedom

I can feel a strange smell is approaching. Who's that? Definitely not some prince in fairy tales.
– Heart Magic

I dare not to draw close. The curse scorches my mind and blood filled my eyes, but his pace remained steady.
– Cross Lock

I put the rose in his hands in hesitation. His eyes are full of surprise. The nightmare for years finally faded…
– Rose of Magic Kiss

He gently covered my eyes, the red ebbed away. My eyes went clear and I saw him smiling.
– Cross of Healing

Farnell, let me take to see the world. So this is freedom. Removed from the strings, my body is found again.
– Shadow of Temptation

The air is cold, the moon is red, and in the silent castle, a blood rose blooms quietly, kissing the night.
– Dark Red Rose

The descriptions of Flower of Magic Kiss are incredibly vague, but they indicate that the character, Farnell, is imprisoned because of a curse. By the silent castle in which the story takes place in, a blood rose blooms quietly, and when she uses her fingers to fold it, she feels nothing from the piercing dark thorns, stating that she is "but a puppet."

During one fated moment, she senses a strange smell approaching. While she questions who it is at first, she dismisses the thought of it being princes from fairy tales. Whoever it is, she dared not to draw close because of her curse, but his pace continued to be steady anyway. His eyes are full of surprise when she hesitantly put the rose in his hand. When he gently covers her eyes, the curse lifts and she sees him smiling. Calling out her name, he wishes to take her out to see the world. The nightmare for years finally ended; she finally attains freedom.

Depending on the perspective, a lot of descriptions can be read literally, figuratively, or both (symbolically). One interpretation is that the curse causes her to cry out blood: the reason why the moon and the moonlight are red may be because the blood stains her vision red. "Blood filling [her] eyes" is also mentioned when the boy approaches. Another compelling interpretation is that the curse causes her to become a slave to her urges: her being a puppet alludes to her lack of control, hence why she is so hesitant.

Retrieved from "https://lovenikki.fandom.com/wiki/Flower_of_Magic_Kiss?oldid=145715"
Community content is available under CC-BY-SA unless otherwise noted.