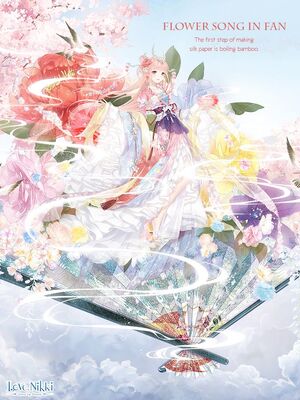 The first step of making silk paper is boiling bamboo.

Flower Song in Fan is a Cloud suit that appeared in a Cumulative Recharge from January 31st to February 6th, 2018 for 1,750

. It can now be obtained through Crafting. The recipes can be bought in the User's Shop for 600

A zither is to be played to one who can really understand. Will you be the one for my fan?
– Dream of Flower Pick

Even a single sparkle may kindle the greatest fire. The boy slept on the bamboo bed, too tired to sense fire
– Sound of the Silk Swallow

Baking paper is the last step to make a fan. How warm is the fire. Giving up to fatigue, Zyun fell asleep
– Clear Cloud Veil’s Chime

Zyun was in danger at that night, but some river wind put out the flame on boat.
– Jade Welcomer

A canoe moored in the misty waters. Zyun can't sleep, putting bamboo splints on wet paper over and over again.
– Flower Bloom Tune

From the smoke comes a girl, with a shiny fan behind. She's tenderly whispering, I don't forget Zyun's favor
– Twin Hibiscus Pendant

Zyun has been learning to craft fan since childhood. He chose to live in seclusion from the mundane trifles
– Heart of Violet Peony

With the twitter of birds, the sunlight shines down. Zyun woke up and found the one he misses is right here
– River Mist under Moon

In the rainy moonless night, I sit alone beside the single lamp. To whom should I share my loneliness?
– Water Word

Jun was once told in dream that people who made fans with the purest heart could realize their dreams.
– Hundred Day Remorse

The first step of making silk paper is boiling bamboo. His pure heart is reflected in the boiling water and rising steam.
– Fragrant Song of the Fan

Jun falls into deep thinking. Behind him is smoke and fire. Bathing in snow and dew every day, he waits for the good news.
– Moon Tinkling

The spring rain wakes the boy from his dream. Heading to the quiet paths, he picked a few bamboo branches.
– Folding Bamboo Dream

Flower Song in Fan is about a boy named Zyun (or Jun) who lives on a canoe. He learned to craft fans since childhood and had chosen to live in seclusion in order to avoid mundane and unimportant things. He was once told in a dream that people who made fans with the purest heart could realize their dreams. Despite this, however, he felt lonely sitting alone besides a single lamp. During the story, he also fell into deep thinking, waiting for "good news", which indicates that something had been troubling him.

Mooring his canoe in the misty waters, Zyun felt sleepless one night and put the bamboo splints on wet paper over and over again. The first step of making a fan made of silk paper was to boil bamboo. During that step, his pure heart was reflected in the boiling water and rising steam. Then, the last step was to bake the paper. The fire was so warm and comforting that Zyun fell asleep from fatigue. However, even a single sparkle could kindle the greatest fire, and as he slept on his bamboo bed, he was too tired to sense the danger. However, the fire was put out by a river wind, and in the silent smoke came a giggle, as well as the sounds of steps upon the surface and a fan unfolding. With a shiny fan behind her, a mysterious girl came and tenderly whispered: "I don't forget Zyun's favor."

By morning when the birds tweeted in the shining sunlight, Zyun woke up, finding the one thing he missed right besides him.

As indicated by the fact that he was "bathing in snow and dew every day" and that "the spring rain [woke him up] from his dream", it is likely that the story takes place around the spring equinox.

It is unconfirmed what exactly he found in the end. However, judging from Dream of Flower Pick, it may have to do with his loneliness, as he wished to play the zither to someone who could really understand, saying: "Will you be the one for my fan?"

Retrieved from "https://lovenikki.fandom.com/wiki/Flower_Song_in_Fan?oldid=145585"
Community content is available under CC-BY-SA unless otherwise noted.