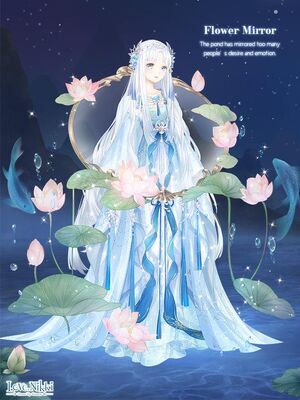 The pond has mirrored too many people's desire and emotion.

Flower Mirror is a Cloud suit that appeared in the Ghost Gathering Event.

There are many legends about mirror in old Cloud. It's said they may gain form out of people's desire.
– Legend of Ancient Mirror


Beside the stone bridge of Ghost City, there is a lotus pond. It's deep and clear, so it's called Mirror Pond
– Water of Mirror Pond


One night, a traveler glanced at the Mirror Pond and found that it wasn't his own reflection!
– Reflection of Water


It's a beautiful maid there. She looks so sad. When the traveler went closer, he found she is shedding tears
– An Illusion


She said after falling into the pond, she was locked by city lord. She asked the traveler to drag her out
– Moon in River


The traveler reaches out to help but only gets dragged down into the pond on touching the water.
– Dew on Lotus


For ages, the Mirror Pond has mirrored too much desire and emotion and they formed this illusion at last.
– Glistening Surface

Retrieved from "https://lovenikki.fandom.com/wiki/Flower_Mirror?oldid=170237"
Community content is available under CC-BY-SA unless otherwise noted.