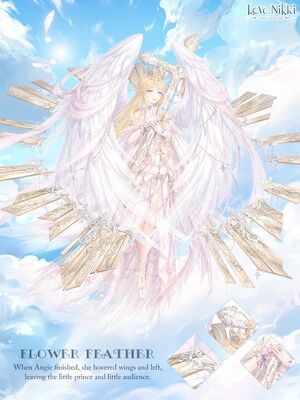 When Angie finished, she hovered wings and left, leaving the little prince and little audience.

Flower Feather is a Pigeon suit that could be obtained from a Cumulative Recharge Event from August 14th to 20th, 2018, for at least 1,750 worth of

The stars on the surface of Lake Bovali ripples as the wind blows. Angie carefully landed on the bank.
– Glory of Sun

The little prince is practicing harp recently. Angie combs her hair while listening.
– Heart of Flower

A fairy passed by. In the ripples left is a figure resembling that of the prince. He's listening too.
– Splendor of Moon

Angie gently waved her wings, the fallen feathers formed a white cross in her hands.
– Purity of Feather

Several days back, when Angie first met the boy beneath the lake. He has a white skin and doesn't smile.
– Coronet of Light

She said hello across the lake surface. The boy was surprised. He pointed at his ears and waved his head.
– Cloud Floccule

The City of Reflection. Angie suddenly remembered the forsaken place. It's an opposite of current world.
– Strength of Wind

Looking at the boy beneath the surface, Angie almost forgot that he's in the City of Reflection.
– White Cross

Then the sound of the harp was heard in the City of Reflection. The little prince didn't notice.
– Softness of Night

Flower Feather describes an elf or fairy named Angie living in the Pigeon Forest who came across Chloris and Cesare one day. Chloris was sitting by Lake Bovaly, the lake in the middle of the forest, and practicing his harp. Angie listened to him while combing her hair, but she suddenly saw some ripples in the lake and noticed someone else was listening. That person was Cesare, who looked similar to Cesare, but he doesn't smile.

Angie was able to say hi to him through the lake, which surprised him. She realized that he must be in Shadow City (or the City of Reflection), though it was hard to realize just by looking at him. Unbeknownst to Chloris, his harp's song could be heard even in Shadow City.

Retrieved from "https://lovenikki.fandom.com/wiki/Flower_Feather?oldid=145704"
Community content is available under CC-BY-SA unless otherwise noted.