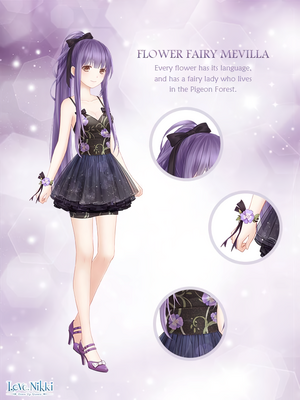 Every flower has its language, and has a fairy lady who lives in the Pigeon Forest.

Flower Fairy Mevilla is a 4 Seasons suit that can be bought in the Fantasy Workshop available through Stylist Associations. The suit is based on an attire worn by Ace. It is also customizable.

Back to 4 Seasons suits

It's said that in the Pigeon Forest there lived floral fairies. Wherever they go flowers will bloom.
– Twined Wind

Every flower has its language and that of Viola Trinity is silence. She always keeps the forest.
– In Silence

Another spring, Mevilla found a fainted boy lie on the bush after saw other fairies off traveling.
– Twined Wind-Gold

The boy wakes up. He is confused to see the purple Trinity. Shouldn't they be yellow?
– Free Blossom-White

When the boy found a picture in the attic, on which it's Mevilla standing in a Trinity field.
– In Silence-White

After feeding the boy, Mevilla didn't answer the boy's question but sent him a yellow Trinity seed.
– Viola Tricolor-White

At first, Mevilla also rode the wind and spread yellow Trinity like other fairies.
– Twined Wind-Silver

Mevilla fell in love with a young man, but his family took her a witch burned her flower field.
– Free Blossom-Red

The man was then forced into marriage and Mevilla, in great sorrow, has never left the forest.
– In Silence-Red

Mevilla thought about the little boy. How long since she last stepped out of the forest?
– Viola Tricolor-Red

In the white recolor, Mevilla finds a boy who has fainted after seeing flower fairies spreading yellow Trinities. He wakes to see Mevilla spreading the Viola Trinities, and is confused as to why they are violet instead of yellow. The boy finds a picture in the attic of Mevilla standing in a yellow Trinity field. After Mevilla feeds him, she refuses to answer his question, presumably about the Trinity color, and eventually sends him a yellow Trinity seed.

In the red recolor, we learn Mevilla once spread yellow Trinities. She fell in love with a young man, but his family took her and a witch burned her flower field. The man was forced into marriage, and Mevilla, in great sorrow, never left the forest again. In the present, Mevilla thinks about the boy and how long it's been since she last left the forest..

Retrieved from "https://lovenikki.fandom.com/wiki/Flower_Fairy_Mevilla?oldid=145633"
Community content is available under CC-BY-SA unless otherwise noted.