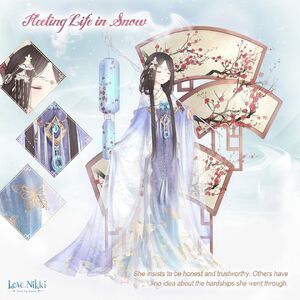 She insists to be honest and trustworthy. Others have no idea about the hardships she went through.

Fleeting Life in Snow is a Cloud suit that could be obtained from February 3rd to 9th, 2019, by recharging for at least 260 worth of

Fang Xue was born to a wealthy family of Cloud. She lead their trade caravans when she was only sixteen.
– Fine Jade

She insists to be honest and trustworthy. Others have no idea about the hardships she went through.
– East Wind


Her home is far away. She dreamed about home but could not hear the accent of her birthplace any more.
– Hometown in Dream


After she drank a cup of plum wine, she smiled. Her long-lost smile can melt ice and snow like spring wind.
– Spring Wind


Where is immortal Peng Lai? In her dream, she can faintly see branches of plum across river.
– Erigeron Speciosus


In the cold, quiet and snow-covered plum garden, she drank warm tea under a plum lantern.
– Freezing Cold


Plums give off unique aroma. Outside the window, buds of plum are covered by snow, but their charms remain.
– Flower Infatuation


She made the plum flower lantern. She loves plum for they cast aside worldly cares and live independently.
– Last Snow

The suit is about a girl named Fang Xue, who is from a wealthy Cloud family. The family is involved in trading, and by the age of sixteen she was able to lead their caravans. However, she missed her home and went through a great deal of hardships.

Fang Xue also dreams about the mythical place Peng Lai, and in her dreams she can see plum trees there.

Retrieved from "https://lovenikki.fandom.com/wiki/Fleeting_Life_in_Snow?oldid=161825"
Community content is available under CC-BY-SA unless otherwise noted.