Love Nikki-Dress UP Queen! Wiki
Register
Don't have an account?
Sign In
Advertisement
in: Suit, Story Suit, Suit with Customization,
and 3 more

Blades danced in the flames as cold stares locked on targets

Flame Gunner is a Story Suit that could be obtained during the Light in Mirror Event.

Vulture cried as sands stormed. A figure swept past the crowd with a whirlwind no one dared to approach.
– Blazing Storm


Children's cries echoed. Her eyes became cold for the hour of hunt. Her muzzle raised, ruthless as herself.
– Hunting Time


Desperation enveloped the village. Marrisa couldn't sit it out. She decided to take the villains out.
– Fly Sand Verdict


Muted and stealthy, Marrisa dove into the mist, did her job and disappeared into darkness again.
– Hazy Shadow


Blades danced in the flames as cold stares locked on targets. The villains were still drunk in dreams of riches.
– Glorious Witness


The breeze rustled the trees. The gagged villains were hung upside down, whimpering as Marrisa walked away.
– Justice Shotgun


Even walking among the jungle of steel, her heart remained pure and kind as she never fled from her true self.
– Kind Nature


The prey fell into the trap and only moonlight remained in sight. Marrisa left without staying another moment.
– Return to the Wild


The whip spoke for her wrath. She then returned the stolen pearls which glowed in the night, bright as the moon.
– Punish Whip

She was an elite warrior of the queen. The rose emblem signified supreme glory and her proud head never bowed.
– Cold Storm


By the Queen's command, the iron rose withered and the glory extinguished. Mela had to obey with unwillingness.
– Frozen Trench


The inescapable darkness haunted her and the heroine lost her fortitude. Mela became lost in the endless storm.
– Cold Recall


There was a faint pink glow in the dark clouds. Mela didn't know what it was, but she decided to capture that glow.
– Dark Tide Lurk


The oath that night was like a guiding light. Mela finally realized that others' opinions were constraints at most.
– Call Of Glory


Pacing at the cliff edge, as black fog parted, determination flashed in her eyes. All problems were solved.
– Deadly Spear Blade


There was no retreat as dignity shone like stardust. With self-recognition, she ended all sufferings.
– Final Choice


She shattered the nightmare and defeated her once confused self. Her faith reforged in the wake of wars.
– Renewed Faith


The dawn of hope shined on forever in which Mela saw an ideal future. So she set out on her journey once more.
– Eternal Daylight Whip 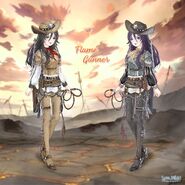 The suit and its customized version 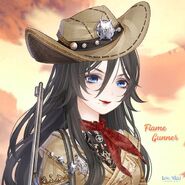 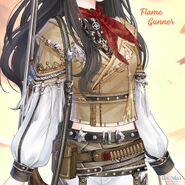 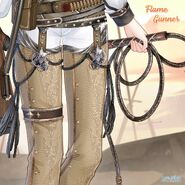