Firm Mountain is a Story Suit that could be obtained in the Art of War Event.

A sword penetrated her body. It was a sword hidden inside a flute.

The breeze turned into a piercing cold wind at night. She held the sword tightly to stop it, despite the pain caused to her palms.

Before the first sword was drawn back, more swords of the same appearance stabbed into her body from all directions. It was that man again. He laughed with contempt and pushed her crumbling body into the abyss.

Ming Shuiyuan woke up with a start, drenched in cold sweat.

There was no sword, but only deep darkness around.

The late night seemed tranquil with the moon in the sky. Only the water and cicada in the courtyard could be heard.

The black tortoise mech was disassembled into parts, exposing the complex structure of the interior. Constant optimizations by Ming Shuiyuan have equipped it with layers of flexible armors and a variety of hidden weapons, making it the most powerful killing machine and an impregnable shield.

A mechanical serpent opened its eyes right after Ming Shuiyuan assembled its components, slithering around her.

A few days ago, she woke up as the dawn shined on the Deep Ocean Pavilion. Right then her maid was still lying on the table, just awake from sleep. The maid couldn't help crying and laughing when seeing Ming Shuiyuan was finally awake.

She was home, as if nothing had happened.

Only when she was changing the dressing could she see the wound and the sharp pain would remind her that it did happen, that the dream did happen in reality.

No matter when, as long as she was not occupied or asleep, she would have endless problems to think about. She didn't know what the reason was, but even the simplest thing seemed like a mess to her.

Maybe it was out of caring, or boredom. The white-haired man who saved her life was found to be waiting for her outside her room when she was going to bed.

They talked for a long time till it was late.

The wind blew into Ming Shuiyuan's room when Xiao Zong left, but it didn't blow all the way into her calm heart.

Zhu Yuxian was no longer the boy who had given a big smile to her at the warm flower field in the South. She used to indulge him with cover-up, which seemed ridiculous now, and the fact was she was even an accomplice.

She has always known that, and she just pretended that she didn't.

However, Bai Yongxi was not trustworthy either. Rebellion had risen in the South though, it wouldn't have been totally separated if he took any action. Ming Shuiyuan couldn't think of any reason why Bai Yongxi would give up the South but one. That is, he exchanged it with something.

It was never easy to see through someone. Human has a warm body, but their hearts are actually as cold as the mechs. Ming Shuiyuan would never trust anyone easily again.

One after another, the components were all assembled into the Black Tortoise, which then started to move. Surprisingly, not even the slightest sound was heard from its movements, but its power was not that low-profile; the mech crushed the iron tool in its mouth within a second.

She would take the responsibility and guard the empire if they couldn't keep it, she thought.

On her own way, she needed no help or understanding, and the South was only the first step of her plan.

However, she still didn't make it to save Yue Qianshuang on New Year's Eve. By the time she arrived at Brocade City, Yue Qianshuang was already dying. The arrows she blocked was negligible compared to the amount in Yue Qianshuang's body.

Ming Shuiyuan commanded the Black Tortoise to wrap Yue Qianshuang's body. As she was trying to cut off the chain from Yue Qianshuang, she heard countless words coming from nowhere. Most of them were doubts, guessing and even slanders with acrimony. The few pleadings were almost overwhelmed.

She didn't react to any one of them, but just placed Yue Qianshuang on the ground carefully.

No one knew why she was here.

And no one dared to approach her, as none of them would understand her.

Without a word, she went on the way back to the South. The Black Tortoise withdrew its weapons and followed behind.

Bixiao's armor and life covered on mountains, turning into human shape. My fighting spirit is steady.
– Boundless Sea and Mountain

In the daylight, a Taiji symbol is seen in the sky. Chant became louder and warble of crane is heard in mist.
– Hanging Sun and Moon

Wearing golden dress, Shan sits there. Cold smoke is rising from her pipe. She views the earth with cold eyes.
– Infinity Future

The earth belongs to gods. Shan lives at the boundary of heaven and earth for long, guarding the earth.
– Stars in Six Directions

The world is mysterious and ever-changing. When smoking my golden pipe with dragon on, I can foretell future.
– Fighting on the Mountain of the Heaven

Arrows were like pouring rain, and sound of chains is incessant. A girl in black rushed in and changed fate.
– Goddess of the Big Dipper

It is Shan's duty to guard the country. She has firm wills. The ways of heaven are impartial to everyone.
– The Spring and Autumn Period

Bricks under her feet were stained by blood, but she was still valiant. Fight for the country with life!
– Spirit of Four Constellations

Past is but a dream. The world and time will not be affected by emotion. Shan writes down infinite stories.
– Lost of Dao

She can foretell future and knows everything. One's fate always changes, and I will fight till I die.
– Unpredictable Fate

The moon and the sun shine the earth. Time flies, but I am immortal. I witnessed the changes of stars.
– Time Runs On

What is 'ten directions'? Heaven and earth, east and west, north and south, life and death, past and future.
– Land of Ten directions

One derives from divine law. Then come two and three, finally come all things. It is the rule of life.
– Taiji Diagram 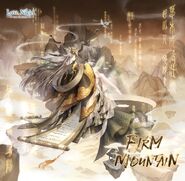 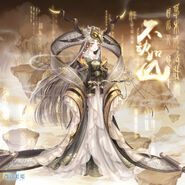 Retrieved from "https://lovenikki.fandom.com/wiki/Firm_Mountain?oldid=123895"
Community content is available under CC-BY-SA unless otherwise noted.