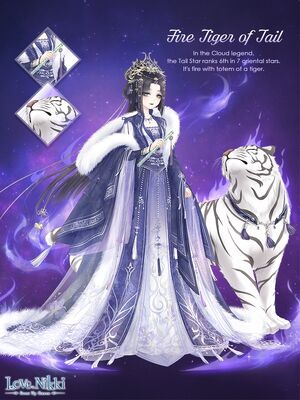 In the Cloud legend the Tail Star ranks 6th in 7 oriental stars. It's fire with totem of a tiger.

Fire Tiger of Tail is a Stars suit that appears in the reoccurring Star Secrets Event.

In the Cloud legend, the Tail Star ranks 6th in 7 Oriental stars. It's fire with the tiger totem.
– Fire Tiger of Tail

The Tail Star is the dragon's tail, the weakest part of the dragon. She calls herself Miss Nine.
– Night of Nine

Tail star is proud and aloof. She lives in the nether zone full of ghost fire all year long.
– Night Glede

As dragon waves its tail, ghost fire rises. The hexagram became dim, and the stars form a scorpion.
– Night Moro

The last constellation is a proud one of force. Among the 7 Oriental stars, only Climax can match.
– Night Crest

As the stars move in the sky, years passed in the mortal world.
– Galaxy Beads

Tail's companion white tiger named Night is her pet, but also an embodiment of her power.
– Night White Tiger

Who says that the ocean will dry, immortals will leave, the universe is like bubbles.
– Nether Purple Iris

Retrieved from "https://lovenikki.fandom.com/wiki/Fire_Tiger_of_Tail?oldid=123604"
Community content is available under CC-BY-SA unless otherwise noted.