Love Nikki-Dress UP Queen! Wiki
Register
Don't have an account?
Sign In
Advertisement
in: Wardrobe Item, Hair, Mature,
and 8 more 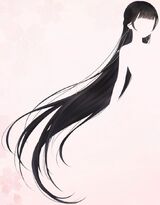 The Tower of Zen took decades to be built, it is the nearest place to the heaven in Cloud Empire.

A long black hairstyle swept to one side, with bangs. There are silver threads intertwined throughout it.

Fine Creation is part of the Cloud Empire suit Phoenix of Genesis.

The other parts of this suit are Phoenix of Genesis, Phoenix World, Bird Pilgrimage, Phoenix Crown, Phoenix's Letter and Queen Saint Phoenix.