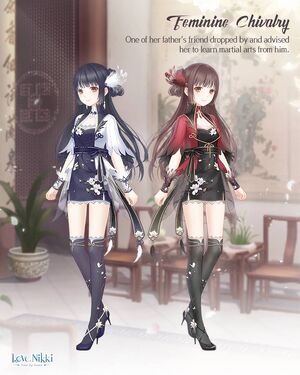 One of her father's friend dropped by and advised her to learn martial arts from him.

Feminine Chivalry is a Cloud suit that can be obtained from the Time Palace Event.

'There is a mischievous girl named Mo Lan in eastern Cloud who made her parents quite worry.'
– Pass This Life

One of her father's friend dropped by and advised her to learn martial arts from him.
– Sea of Clouds

Learn your posture then practice martial arts. How could a young girl like her know its difficulty?
– Splendid Twilight

The next day, she left for the South with her mentor. She was often asked, 'Girls learn fighting? Is it hard?'
– Unresistant to Cold

'Tough on the outside, but soft on the inside.' She replied disdainfully, 'Why can't girls learn this?'
– Flowers under the Moon

Back then, she only repeated her mentor's words. After leaving mentor, she realized she has to be strong.
– Dipping in Snow

Learning martial arts is all about helping others. She bears in mind her mentor's words and her dream.
– Dimly Snow

At the moment, the Storyteller, beating his wooden block, said slowly, 'You'll know the rest next time.'
– Pale Bones and Ice

'When little Mo Lan finished her apprenticeship, she became a swordswoman.'
– Pass This Life-Night

She saved many people while incurring hatred. One night, Mo Lan was trapped and beset by scoundrels
– Sea of Clouds-Night

Though she is excellent, It's difficult for Mo Lan to protect the weak scholar all by herself.
– Splendid Twilight-Night

At this time, the silent scholar gave Mo Lan some hint. Mo Lan seems inspired and gains the upper hand.
– Unresistant to Cold-Night

She evaded the enemies attack swiftly with a perfect move and beat them back.
– Flowers under the Moon-Night

Mo Lan thanked the scholar and wondered who he was. The scholar only helped her because she's righteous.
– Dipping in Snow-Night

They admired each other and traveled together in the South and their story passed on.
– Dimly Snow-Night

'To know more about the story, please come tomorrow.' The storyteller stopped, leaving the listeners upset.
– Pale Bones and Ice-Night

The suit describes a riveting story that is told by a storyteller to a group of listeners. The story is about a girl named Mo Lan from Cloud. One day, a friend of her father told her that she should learn martial arts from him. She went to the South with him to learn. She was often questioned and asked why she is learning martial arts, but she only responded "Why not?"

She eventually left her mentor and became a swordswoman, which she used to save many people. One night, Mo Lan was trapped while defending a scholar, and she wasn't sure if she could do it by herself. The scholar, however, wordlessly gave Mo Lan a hint, which she used to get the upper hand and win the fight. Mo Lan thanked the scholar for his help, and they went on to travel the South together.

Retrieved from "https://lovenikki.fandom.com/wiki/Feminine_Chivalry?oldid=131736"
Community content is available under CC-BY-SA unless otherwise noted.