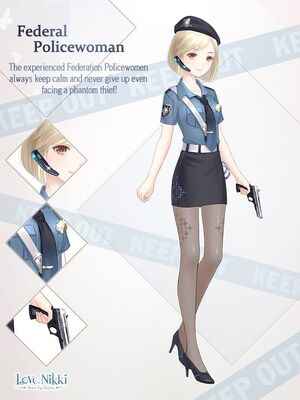 The experienced Federation Policewoman always keep calm and never give up even facing a phantom thief!

Federal Policewoman is an Apple suit that can be obtained by Crafting, and the Target Suit of Chapter 17. The Dress and the Shoes are also needed to pass V1: 17-9 To Disperse Love Songs.

The Federation policewomen are as clear-cut as her short hair.
– Neat Short Hair

The experienced Federation policewomen always keep calm and never give up even facing a phantom thief!
– Federation Policewomen

Policewomen in the federation must wear black silk stockings with defensive power, but it can only prevent minor injuries.
– Federation Starlight

They could catch up with the theif on high heels. Don't overlook policewomen of the Federation.
– Policewoman Step

Federal police are currently equipped with the latest microphones which have the functions of contact, GPS and recording.
– Police Earphones

Watch out! The latest Federation police hat may have secret weapons inside!
– Federal Police Hat

The Federal policewoman's gun is not only a key design element, but also a weapon that protects civilians and deters criminals.
– Federal Police Gun

The descriptions are about the outfit of a typical policewoman from Apple Federation. Each part of their uniform is important, from their hats which hide secret weapons to their microphones, which also serve as a GPS system and a recording device. Even their hosiery has the increased ability to defend them from minor attacks. The guns are multifaceted - they are both a styling feature and a useful weapon. 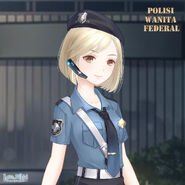 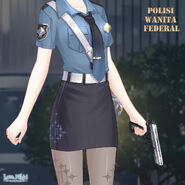 Retrieved from "https://lovenikki.fandom.com/wiki/Federal_Policewoman?oldid=145729"
Community content is available under CC-BY-SA unless otherwise noted.