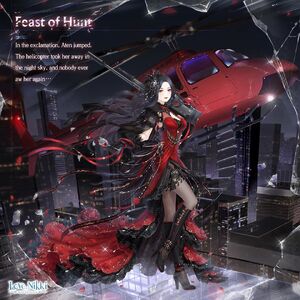 In the exclamation, Aten jumped. The helicopter took her away in the night sky, and nobody ever saw her again...

Cold night wind strokes the hair of Aten. She overlooks this dazzling intoxicated city. Bullets have been loaded.
– Sex City

The lights were on, banquet in Creta City has started. Tonight, the highlight is Aten, an uninvited guest.
– Night Banquet Dance

In the dining hall, guests in gorgeous dresses talk over upscale wine. Air of joy fills the place
– Prelude of Crisis

The temptation to kill the foe almost killed Aten's reason, but it's not time yet. She just brushed past him
– Dark Vision

Aten, holding a cup, was mediating between the guests. In the meantime, she remembered all the guards here.
– Stunning Moment

The banquet host finally showed up. Aten grinned, bad guys are always those who fear death most.
– Pathos Trip

It's a steel jungle instead of an order city. Rules didn't bring Aten justice, so she fights for it herself.
– Dark Flower

Target acquired. Aten left in silence. An ominous broken glass was there, but nobody noticed.
– Crystal Crack

The curtain was pulled open slowly. Guests in the light failed to see the hunter outside who watched them.
– Hunter in Dark

The hands adjusting the sight were so steady. She kissed the silencer, 'let me escort you to heaven.'
– Gorgeous Camouflage

Here comes the target in the center of the dance pool. In the climax of the banquet, Aten pulled the trigger
– Thrill Resonance

Her brow tempts. She is like blooming rose or the burning fire, attracting all the attentions.
– Flame Rose

The stage is set and music is on, waiting for the red dress to start the prelude.
– Vengeance Nocturne

Nobody sees the trail of bullet. Glass shattered, prey under spotlight fell, and his bodyguards were in confusion.
– Explosion Spiral

Finally somebody found the platform she stayed, but they only found the red dress and a dark head flower
– Blood Banquet

In the exclamation, Aten jumped. The helicopter took her away in the night sky, and nobody ever saw her again…
– Deep Pursuit

Feast of Hunt is about a woman named Aten. She attended a banquet in Creta City uninvited, where she intended to kill a foe. She had experienced injustice despite the laws of the city, and she needed to take her justice into her own hands. Aten had to exercise restraint upon first seeing her target, waiting until the time was right. She paid attention to all the guards while she blended in between the guests.

Finally when he went to the center of the dancing area, she kissed her silencer and pulled the trigger with steady hands. Glass shattered and Aten ran while everyone was confused. She made it onto a platform and was nearly caught, but she jumped onto a helicopter that took her into the night sky, never to be seen again.

Retrieved from "https://lovenikki.fandom.com/wiki/Feast_of_Hunt?oldid=145736"
Community content is available under CC-BY-SA unless otherwise noted.