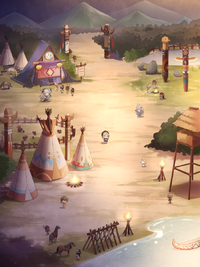 Special map for the Fate Echo event. There are 2 quiz stages and 3 styling battle stages. Completing these stages will give you Faith Runes

Tuda
Tribe Stardust is to hold a divination rite. It's a long journey, change into something easy to move.

Momo
To travel the desert, you should know some astrology knowledge. Get ready!

Cali
Are you here for the divination? Wonderful, let me interview you before the rite starts.

Starlet
Though the rite itself is very sacred, prophecy is a little weird. Wear something invisible and sneak into the temple to find it out.

Salma
The divination is but a glance of the Goddess. Wear Wasteland clothes and join the ceremony.

Q. What's the origin of the western astrology?
A. Mesopotamia

Q. Which of the following doesn't match Wasteland's weather?
A. Abundant rain

Q. What are the 12 astrological signs?
A. 12 ecliptic sectors

Q. What's the reason of eclipse?
A. Sun blocked by earth

Q. Which star system does Star Secret theme suits relate to?
A. 28 Mansions

Q. What’s the plane that Sun follows over the course of a year?
A. Ecliptic

Q. Which of the following cannot be done by astrology?
A. Change reality

Q. When you travel in the Wasteland, what's the least possible thing to see?
A. Snow

Q. What's the biggest desert in the world?
A. Antarctic Desert

Q. How to call a watery area in a desert?
A. Oasis

Q. What's not a necessity for a desert travel?
A. Momo

Q. Which of the following can help survive a desert?
A. Bring sufficient water

Q. You see a city in the desert. What could that be?
A. Mirage

Q. What's a common plant in the desert?
A. Cactus

Q. What's the device to measure the position of the celestial body?
A. Astrolabe

Q. What's NOT a common resource in the desert?
A. Momo

Q. Besides observing, how can ancient people perform astrology?
A. Calculate

Q. Which celestial body is deemed ominous in ancient times?
A. Comet

Retrieved from "https://lovenikki.fandom.com/wiki/Fate_Echo/Map?oldid=59800"
Community content is available under CC-BY-SA unless otherwise noted.