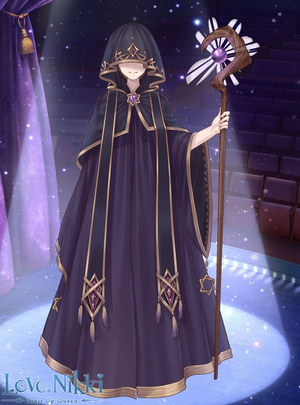 The Fantasy Envoy is a mysterious character in Love Nikki.

The Fantasy Envoy wears long purple robes and carries a long, hooked wooden staff with a purple gemstone in the center of the hook. He wears a smile on his face, the hood covering his eyes.

The Fantasy Envoy is playful and confident. He greets Nikki and her friends cheerfully, telling them, "Let's be friends!"

Nikki and her friends first met the Fantasy Envoy in Royal City, Lilith for the Fantasy Styling Contest. He said he was there to gauge the ability of the stylists there, and challenged Nikki to a special styling contest using the Super Fantasy Interlink PK Skill. This contest required multiple consecutive styling battles in different styles.[1]

After competing with Nikki, he left, but his impression on Nikki and her friends was lasting, as they later compare ridiculous styling battle mechanics to his Super Fantasy Interlink PK Skill, such as the Casket Trials.[5]

The Fantasy Envoy is familiar to Nikki, and she says she feels as though they have met before the first time they meet. He brushes this off, telling her that she must be detecting "a certain kind of affinity" that he possesses.[1] Nikki is unnerved by his presence at first, and though she calls him "awesome", feels tired after battling with him.[6] Despite this, Nikki thinks highly of him, expressing that he is "a very interesting person".[7]

Retrieved from "https://lovenikki.fandom.com/wiki/Fantasy_Envoy?oldid=128825"
Community content is available under CC-BY-SA unless otherwise noted.