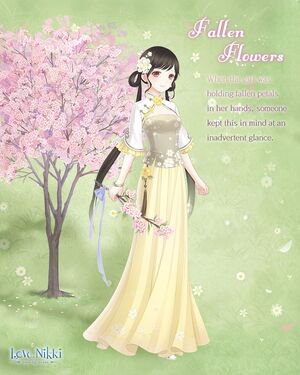 When the girl was holding fallen petals in her hands, someone kept this in mind at an inadvertent glance.

Fallen Flowers is a Cloud suit that can be obtained from Lunar's Dreamland.

When the girl was holding fallen petals in her hands, someone kept this in mind at an inadvertently glance.
– Innocent Aroma

Vivian gave him a sachet in return, which had his name embroidered on the plain surface with gold thread.
– Flower Remains

Petals are falling into the lake with the wind, like stars drifting on the water.
– Crystal Water

It's time for flower falling, Vivian stands alone under pear tree, recalling that he picked a flower and put in her hair.
– Vivid Garden

They are said to his mother's jewelry when she got married. When I return, we will get married.
– Aroma Bracelet

The suit describes a girl named Vivian, who meets a boy. She gives him a “sachet”, with his name embroidered on. The war begins, and the boy is determined to fight. Vivian plans to marry him when he returns, reminiscing on when he put flowers in her hair.

Retrieved from "https://lovenikki.fandom.com/wiki/Fallen_Flowers?oldid=142978"
Community content is available under CC-BY-SA unless otherwise noted.