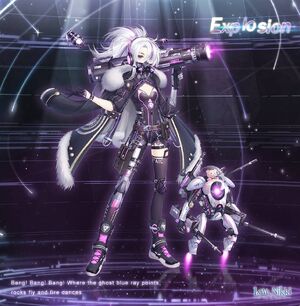 Explosion is a Ruin suit that can be obtained from Lucky Bags from March 25th to April 12th, 2019. The suit was thought to be an International server exclusive but it has appeared on the Vietnamese server.

Under a burning cloud, on the singed earth, Patrice stood on the remains, looking into the distance.
– Fire Storm

After receiving the order from the master, the spring of Kumas Bear was ready. The otherworldly gate is open.
– Explosion Smoke

Gales swept the battlefield and the cannons kept firing. Kumas jumped onto Patrice and together they moved forward
– Tornado Element

In a split second when enemies drift off, target and fire. Ashes soar before they could show surprise.
– Power of Speed

While Kuma shuttles in the center area of the battlefield, Patrice offers fierce fire cover. They are the best.
– Kumas

The smokes on the battlefield are the best disguise. The sparkle and growl live up to her name 'Explosion'.
– Smoke Screen

As the pink light flickers, nobody escapes the abyss brought by the explosion.
– Dazzle Grenade

Pull the level of the grenade, and with an elegant curve, it finds it way home. 'Explosion made the world!'
– Trigger Miracle

Before the weapon went dry, take out the magazine and have it loaded smoothly. This is the rhythm of combat!
– Dark Particle Zone

The immense power contained in the Compress Quantum Cannon, under the control of Patrice, is spreading death.
– Thrill Quantum Cannon

Armor made from special material that features both super force and quick reaction allows fire in quick movement!
– Faith Pivot

In a recent hot game, 'Explosion' Patrice went so popular for her daunting offense power and cute bear toy.
– Explosion

In a recent hot game that utilizes high technology and is set in a war-torn land, "Explosion" Patrice is a popular player thanks for her daunting offense and cute bear toy companion, Kuma. After giving commands to her partner, the two entered the battlefield through an otherworldly gate. Patrice wields the Compress Quantum Cannon that contains immense power, and her nickname "Explosion" can be explained by her use of smoke screen and hand grenades; the former for disguise and the latter for mass destruction.

Retrieved from "https://lovenikki.fandom.com/wiki/Explosion?oldid=143911"
Community content is available under CC-BY-SA unless otherwise noted.