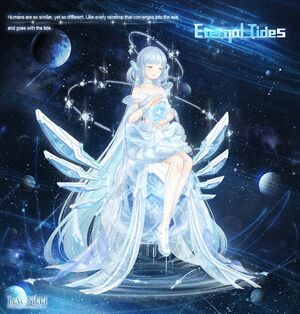 Humans are so similar, yet so different. Like every raindrop that converges into the sea, and goes with the tide.

Eternal Tides is a Ruin suit that appeared in the Ruin Tide Event. It can now be obtained through Crafting.

Tip exists in a world without secrets. All the data are transparent, so the human race has no place to hide.
– Broken Light Tide

Anyone would be shocked by Tip's ideology of social networking: it was a vast ocean.
– Illusory Dream

Inhabitants of this place are in Tip's eyes like water, converged into a sea. Their voices are like tides.
– Three Thousand Moon Tide

Man is a very interesting creature. Tip can interpret peoples' data and know them without ever meeting them.
– Shining Dome

The untraceable parts fascinated her like code. Characters streamed from the terminals to her eyes.
– Emotional Code

Humans are so similar, yet so different. Like every raindrop that converges into the sea, and goes with the tide.
– Vast Lunar Sea

Moonlight floats along in a sea of data. Tip lowers her eyes on the consciousness in her hands.
– Shining Moon Water Crown

As Tip processes the constant influx information, she forms and unique way of 'thinking'.
– Heart of Disillusionment

Tip's program is too complex to imagine. But outside this cold data, she often shows her femininity.
– Data Connection

I control the all online data, protector of human emotions and ideas. I am above this world, an unknown spy.'
– Anonymous Spy

Tip is more tolerant than AI. When someone disrupts a social network, she does not expel them immediately.
– Galactic Imagination

As long as someone has left traces in Tip's network, she can easily find their movements from the complex data.
– Thousand Rivers into the Sea

People understand that Tip is like the foam of the sea. Connecting the material land and the data ocean.
– Real Light and Shadow

Tip is the sanctioner of information, but aware of falling into the abyss of data. Code flows through the darkness.
– Data Abyss

Tip's handles the world like mini people and cars with short lines of code, the core of the world.
– Miniature Moon and Stars

I am reinforced by data, depended on by humanity. I shelter them and will exist until the end of information.
– Eternal Tides

She knows that the vast landscape has created different ways of thinking, just like there are different algorithms.
– Brilliant Fission

In the vast ocean of data (which in actuality is the social network) there is an overseer, and that overseer is Tip, an ultra complex AI who transcends the human race. As she processes the constant influx information, she forms an unique way of 'thinking'. Despite humans being like raindrops that converges into a big sea—forming a tide—she acknowledges that humans are incredibly nuanced. She can interpret people's data and know them without ever meeting them. The untraceable parts fascinates her; unlike other AIs, Tip is more tolerant and does not expel intruders who disrupts the social network, but as long as someone left traces on Tip's network, she could easily find their movements from the complex data. After all, Tip is the controller of all data and the protector of human emotions and ideas. Even though she describes herself as an "unknown spy", people do know of her existence, being the foam of the sea who connects the material land to the data ocean.

Outside of the cold data, she shows her femininity. According to herself, Tip will exist until the end of information, depended on by humanity.

Retrieved from "https://lovenikki.fandom.com/wiki/Eternal_Tides?oldid=145777"
Community content is available under CC-BY-SA unless otherwise noted.