Love Nikki-Dress UP Queen! Wiki
Register
Don't have an account?
Sign In
Advertisement
in: Wardrobe Item, Dresses, Mature,
and 6 more 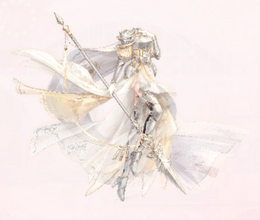 She is the star of the kingdom, directing all the soldiers who believe in light and peace.

A headless body, of course, wearing Undead Light, Morning Star, and Invincible Trip. The body is in a sitting position, the left arm putting a hand on the neck while the right caries Hope Blade.

Eternal Star is part of an alternative version of the North suit Oath of Honor.

The other parts of this suit are Sacred Song of Snow, Flower of Wishes, Glorious Light and Unspoken Oath.