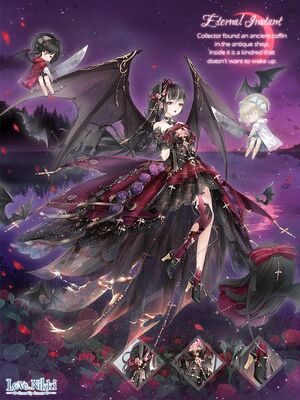 Collector found an ancient coffin in the antique shop. Inside it is a kindred that doesn't want to wake up.

Eternal Instant is a Pigeon suit that appeared in the Night Castle Event. It can now be obtained through Recipe Crafting.

In the silent night, hunters lurk in the shadow. He revealed his tusk, leaving fright and pain to the girl
– Infinite Dark

After that, she became the prisoner of the night. There is no sunlight but moonlight and darkness.
– Eternal Instant

She started to hunt clumsily. She would pretend to be drunk and allure those covet her beauty.
– Blood Flower Wither

She runs crazily on the street. Where should I go? Where is safe?
– Dim Way

It knows her better than anyone, and it will always stay with her.
– Shadow Dolls

Deserted by all the beautiful words in the world, why not just fall into the abyss and never wake up.
– Ominous Bat

It was so beautiful that the kind poor painter bought the girl who pretended to be drunk a hot cocoa.
– Faint Light in Night

The painting of the girl knocked the door of upper society for the painter. It's a promise he gave her.
– Remaining Ember

The happiness was gone, the light was out. The evil inside the soul began to show and became dark wings.
– Wings of Hunt

The Kindred isolated in the world should not possess wild wishes. She isolated herself and returned to dark.
– All Gone Silent

Similar with other dolls, only it didn’t choose to wield a chopper, perhaps it carries something soft from her.
– A Different Doll

She gained the immortality everyone dreams, but it brought her pain. Everything flows, only she is fixed.
– Sorrow of Eternity

Collector found an ancient coffin in the antique shop. Inside it is a kindred that doesn't want to wake up.
– Coffin Closed

The promise gave her hope. Yet after that, the sudden fame and fortune only made him forget her and the promise.
– Midnight Split

Eternal Instant is about a girl who becomes a Kindred after being bitten by someone lurking in the shadows. As a new kindred, she did not know how to hunt or where to go. She pretended to be drunk in order to attract people, only to hunt her, but one painter just bought her a hot cocoa. They ended up becoming close, and it's implied that he painted her while making her a promise. However, he became famous and forgot all about her. She was heartbroken, but she realized it was the nature of Kindred to be isolated and she had only been deluding herself, so she went back to being alone like before. She enclosed herself inside a coffin and refused to wake up despite her immortality. She ended up being found by a collector in an antique shop.

It is likely that the collector is the same as the one mentioned in Dark Poem, the other suit from the event.

Retrieved from "https://lovenikki.fandom.com/wiki/Eternal_Instant?oldid=145680"
Community content is available under CC-BY-SA unless otherwise noted.