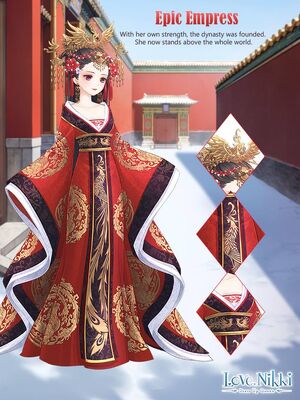 With her own strength, the dynasty was founded. She now stands above the whole world.

Epic Empress is a Cloud suit that can be obtained through the VIP 10 package.

She was the only female emperor in China's history.
– Heavenly Emperor

She created Zhou Dynasty on her own, ruling the realm as a feminine, and governing the whole land in peace.
– Epic Empress


Empress Wu Zetian created nineteen new Chinese characters, among which one character was Zhao.
– The Empress


History is full of wars and sacrifices; the one who wins last is the ruler of the country.
– Phoenix Heaven


Born with the pupils of dragon and the neck of phoenix, which are the signs for extreme power.
– Supreme Power


She was granted the title Wu Mei by Tang Taizong, and the title Queen of Heaven by Tang Gaozong.
– Lady Wu Mei

Retrieved from "https://lovenikki.fandom.com/wiki/Epic_Empress?oldid=168307"
Community content is available under CC-BY-SA unless otherwise noted.