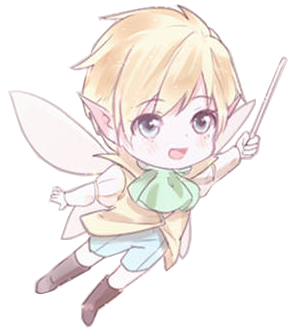 Eli in the Time Palace artwork[1]

Eli is a character in Love Nikki. He is an elf that serves as the master of a mysterious and alluring mirror world.

Eli is a tiny elf with short blond hair and wings.

Eli is arrogant, selfish, and quick to anger. He is primarily motivated by getting more power, and he wants this power so he can craft an even more powerful staff. Even when Chloris takes pity on him and offers him a new life, he takes the opportunity to ask for more things for himself. However, he's also someone who truly believes illusion is better than freedom and that he is doing his victims a favor by bringing them happiness, even if it's a false happiness.

Thousands of Years Ago Edit

Eli was created or maintained by his master, who is likely the god of Pigeon Forest;[3] however, Eli's master grew to loathe him for his arrogance. Therefore, his master put him in the Pamir Forest, where his mirror stayed for thousands of years, unable to be destroyed or moved.[4] After being deserted, Eli gave himself the name Eli.[5]

There in the Pamir Forest, Eli lured many forest creatures into his mirror to collect dream power and strengthen himself.[6] His goal was ultimately to craft the 'Dream Staff', a design that his master told him could defeat anything in a styling battle.[7]

Chloris, while on a regular patrol, was separated from the people he was with[8] and found Eli's mirror in the Pamir Forest. He entered the mirror to find many beings that had gone missing, such as the dwarf Jones and the goblin Penny.[9]

Eli revealed himself, but became incredulous when Chloris didn't fall for his vision and kept his clear head. When Chloris revealed he had no desires that could be manipulated by Eli, he was even more surprised.[2] This surprise turned to anger when Chloris helped to free all of the beings in the mirror. While Eli tried to insist they wanted to stay in the illusion, Chloris maintained that it was his responsibility to guard the forest.[7] After Chloris freed the creatures, Eli came out from the mirror to warn Chloris that this was not over. He didn't believe that Chloris could have no regrets or desires and vowed to one day trap Chloris in his mirror world.[10]

Chloris was unswayed by his threats. From that point forwards, not only did he make his best efforts to spread the word about Eli's dangerous mirror, he also returned each time he woke up to free anyone else that had been stuck in the mirror.[10][11]

By this year, Eli was alone, as everybody in the forest knew to avoid him. When Choris woke up during the summer, he went to Pamir Forest anyways, and, curious about what he might see this time, entered alone.[11] This time, he saw his beloved Flora, and spent another moment with the mirror version of her before deciding to leave the illusion.[12] Eli revealed himself, frustrated that he hadn't managed to trap Chloris even though he clearly had desires and regrets like his other victims.[6]

Angrily, he told Chloris to leave now that he had gotten what he wanted: Eli was stuck alone in the forest, powerless while the world moved on around him. However, Chloris considered Eli and offered him the opportunity to come with him to the southern Uno Forest. He believed that Eli's mirror could provide an opportunity to teach young elves about desire and their own limits. After a moment of consideration, Eli agreed, though he claimed it was only because Chloris had asked so nicely. He also immediately started to rattle off a list of demands about how he wanted to live.[6]

Eli's time in Pigeon Forest serving as an educational tool did not continue for longer than a few months. At some point, he continued to lure beings into his mirror, including one girl called Feya, whose dreamscape was to work for a fantasy carnival in the mirror and try to lure others in herself.[13] Eli's mirror was, by July of that year,[14] moved to Queen Elle's castle in Oren. It hung in a corridor, and called out to Debbie, Nikki, and Momo when they were about to be captured.[15]

Once they entered the mirror, Eli tried to create an illusion that the three of them would like before revealing himself. He seemed to think they were somebody else, though, as he referenced an agreement regarding Chloris and Lake Bovaly that Nikki didn't recognize.[3] However, Debbie realized he wanted to deliver a message from Chloris to Ace, and offered to do it for him on behalf of the Iron Rose Stylist Legion. Eli recognized the name as Queen Elle's group of stylists and passed on the message, which was that Chloris was waiting for her in Royal City.[16] While they were inside the mirror, he also showed Debbie, Nikki, and Momo illusion versions of people they wanted to see: Mela, Annabel, and Starlet.[17][18][19]

Eli is older than Chloris, indicated by how Chloris referred to him as his respected senior.[6]

Their first meeting was not pleasant as Chloris seemed to put a stop to Eli's dreams of crafting the 'Dream Staff'. Not only did he free the creatures whose power Eli was drawing from, he also debunked any claims that Eli's goal of crafting an all-powerful staff would actually work, explaining that the overall styling is more important than any one individual item.[7] However, Eli was intrigued by Chloris, the one elf he'd met who was not susceptible to his illusions.

Their meeting in the year 680 showed Chloris taking more pity on Eli's state of total powerlessness, prompting him to invite Eli to use his power for a more educational purpose. Later, while Chloris shows Eli's mirror to younger elves, he warns them not to call Eli a "bad elf", as it could anger Eli.[8]

Retrieved from "https://lovenikki.fandom.com/wiki/Eli?oldid=143762"
Community content is available under CC-BY-SA unless otherwise noted.