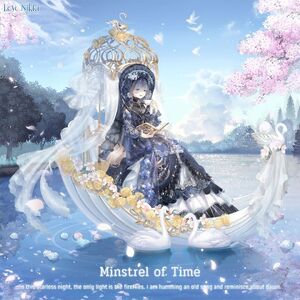 The best healer in the forest[1]

Unknown (over a thousand years ago)

Guardian of the Forest Epics

Elaine is a character in Love Nikki. She is the guardian of the Forest Epics in Shadow City and the sister of Rachel.[3]

Elaine has long, pale blonde hair, blue eyes, and dark lips. She wears an elaborate, classic Pigeon-style dress with a large veil covering her hair and part of her face. She gives off a mysterious, wise aura, like something from a story.[4] It's said that she resembles her sister, Rachel.[5]

Elaine takes her duty as the Guardian of the Forest Epics very seriously, and holds a great respect for history.[6] As a healer, she was extremely patient and kind. She is strong-willed, though even she was upset by the losses faced by the elves in the War of Kindred and Elves. During her time living in the Shadow City, her determination allowed her to avoid being corrupted by the darkness.[5]

Elaine once lived with her sister Rachel in the Pigeon Forest, where she was the best healer. She was immensely dedicated to her craft, researching thoroughly in order to best heal the elves. She and her sister had a good relationship, though her sister was much more playful and carefree than she was.[5]

She was there for the War of Kindred and Elf, doing what she could from the battlefield, but it wasn't enough. Her teacher, the previous Epic Guardian, died, as well as the King,[1] and Elaine was left distraught. Elaine became the new Epic Guardian and spent her time wandering mournfully between the tombstones. She carried the Tome of Time that she'd inherited with her all the time.[5]

However, nightmares began to plague those living in the forest, including her sister Rachel. When the Kindred were banished, Elaine went with them. She appeared in Rachel's nightmare, pushing her away before falling wordlessly through the lake and into Shadow City. The last Rachel saw of her before she woke up was Elaine's relieved smile. When Rachel went to the real Lake Bovaly, she realized they were separated for good, with Elaine in Shadow City and Rachel left feeling betrayed in Pigeon Forest.[5]

Rachel began to assume Elaine's responsibilities, reading the books Elaine had read and taking on her healing duties. However, she soon began to assume her identity, and believed that she was Elaine. Only when Elaine herself appeared in the forest as a spectre, worried about Rachel's well-being, did Rachel remember that she wasn't Elaine at all.[7]

Elaine opened the Tome of Time for her, causing the history of both the Pigeon Forest and Shadow City to be chanted through the air around them. After it was done, Elaine disappeared again from within Rachel's embrace. Elaine's actions inspired Rachel to carve their history into the stones of Pigeon Forest.[7]

Nikki, Mela, and Momo ended up, unbeknownst to them, in Shadow City, with the goal of finding Rachel in the Pigeon Forest. The kindred Kyle took them to Elaine instead, believing her to be the next best thing.[3] They came across her in what appeared to be a grassy clearing bathed in fluorescent light, though it was possible they were under an illusion, as the real Shadow City was filled with dead, decaying vegetation.[8] She had her eyes closed and was holding the book Memory of Time.[4]

Nikki approached her and politely requested to borrow her book, due to her mission to find "the shining stars in the Elf Kingdom", which she believed to be a key to King Sayet's treasures.[9][10] Elaine heard out Nikki's request, but refused on the grounds that she was not properly respecting history. She commended Nikki for her bravery, though, and when Nikki persisted, she allowed her to challenge her to a styling battle on the theme of "traditional ceremonial Pigeon attire". Nikki won, and Elaine allowed her to borrow the book.[6]

After they left, Elaine told Rachel about Nikki, Mela, and Momo, who told Chloris and the other members of the Iron Rose who were looking for them. This allowed them to determine Nikki was in Shadow City and rescue her.[11]

When Shadow City opened again, Elaine left and reunited with her sister at long last. Together, they looked after Chloris, who had been bitten by his twin brother Cesare after Shadow City was reopened. Elaine and Rachel set off towards the Stele Forest again to look for scrolls that might help heal Chloris, with Nikki and her friends following.[12] Chloris collapsed during the journey, and Elaine became distraught, remembering her failure to save her teacher and the King a thousand years ago.[1] After they were unable to find anything that might save him, Nikki and her friends left Chloris in the care of Elaine and Rachel while they set off to look for a cure in the Dwarf city of Plata.[13]

Elaine and Rachel have an immensely close bond, despite their different personalities, with Elaine being the serious, protective one and Rachel being the carefree and playful one. Elaine sacrificed herself by going to Shadow City with the Kindred, though Rachel felt anything but comforted by being separated from her sister. Their separation was extremely hard on Rachel, who convinced herself she was Elaine in order to cope until Elaine intervened. However, Rachel dedicated herself to recording their history in the hopes that one day they could be together again and float through the lake peacefully like they used to.[5][7]

Retrieved from "https://lovenikki.fandom.com/wiki/Elaine?oldid=136036"
Community content is available under CC-BY-SA unless otherwise noted.