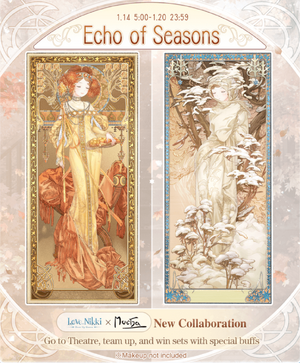 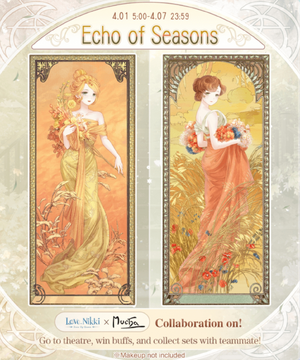 A collaboration event with the Mucha Foundation, bringing Alphonse Mucha's work to the game as wardrobe items.

The event made its first International server debut on January 14th to the 20th, 2020. It then returned for a second season from April 1st to the 7th, 2020.

Team up with another player and compete in a 2v2 styling battle based on a theme to earn event currency.

The theme changes to a random one, every day as well as 5 free chances for each. More attempts can be bought for 30

each. The themes between Season 1 and Season 2 of the event were different, and focused on the fashion of the respected season portrait in Mucha's work.

The player's performance is also based on a random buff which will last for the next five turns. When you collect a certain amount of the event's currency, it can then be exchanged for rewards like: in-game currency or parts of the Autumn's Promise and Winter's Grace suits.

Each buff will be ranked between 1★ and 3★, with 3★ giving the most powerful buff.

Each season had differently named buffs, but the same attributes were given. One buff:

Retrieved from "https://lovenikki.fandom.com/wiki/Echo_of_Seasons?oldid=114765"
Community content is available under CC-BY-SA unless otherwise noted.