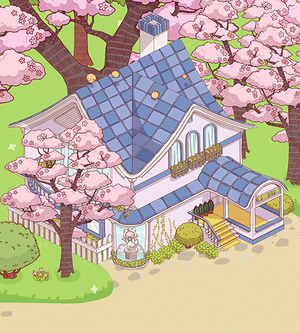 Nikki's home on Earth, from Hello Nikki-Let's Beauty Up

Earth is the world where Nikki and Momo are originally from. It has many things in common with Miraland, which is considered "another dimension of the Earth" by Momo and his grandfather's grandfather.[1] It is the setting of both Nikki UP2U: A dressing story and Hello Nikki-Let's Beauty Up.

For more information, see History of the world

Nikki grew up on Earth with her mother, father, and sister, as well as her pet cat Momo, who lived with her for over three years. She originally got Momo from a pet market, and initially took him for a white baby bear.[2]

While on Earth, Nikki enjoyed various activities such as swimming in the summer, going out with classmates, making origami, hiking, playing DOTA, going to rock bands, cosplaying, and modeling.[3]

She also made clothes from time to time, including a little lion back pack.[4]

Nikki and Momo were taken to Miraland in the year 680 of the New Era in Miraland's time.[5] It is unknown what year it was on Earth when this occurred.

It is not explicitly stated where Nikki lived. However, it's said that Cloud Empire resembles her hometown.[6][7] It's also said that Apple Federal, especially the modern dressing style, is similar to her hometown.[8] It rarely snows in her hometown.[9]

Bangladesh is a country in Asia described as having four colorful seasons and a strong connection to nature. The prolific poet and artist, Rabindranath Tagore, is also from Bangladesh.[10][11]

Brazil is a country in South America. It is described as being home to ancient civilizations such as the Mayans, and having music and dance like the samba in Rio de Janeiro.[12]

China is a country in Asia. It is home to the empress Wu Zetian, who was the only female empress in China's history and who created the Zhou Dynasty on her own.[13]

While on Earth, Nikki visited Lijiang, China, where she met up with her sister to spend holiday time together.[14] They visited Yulong Mountain while they were there[15] and watched the sunrise.[16] They later visited Shangri-La.[17]

Shanghai is also mentioned in relation to a suit designed by the Ancient Pavilion Designer, Story of Shanghai. It describes Shanghai as "dreamy" and a place where a brewing storm could be forgotten.[18] It is unclear what the relationship is between Shanghai and Miraland, or if the Designer knew about Earth.

England is a country in Europe. Nikki, her sister, and Momo once went to its capital London on holiday, where Nikki bought two separate outfits, one for day and one for night. She also wore comfortable shoes throughout the trip, which distressed Momo due to their simplicity. She later brought the clothes to Miraland, which made her friends curious about London.[19]

Greece is a country in Europe where the Olympic games were born and is known for its gods and goddesses such as Athena and Venus.[20]

Mongolia is a country in Asia. It is described as having grasslands where one can dance. Nikki apparently visited Mongolia, and dreamed of the dances later.[21]

Scotland is a country in Europe. Though it is unknown if Nikki ever visited Scotland, she told some girls in the North Kingdom about how boys in Scotland wear kilts, which made them curious.[22]

Similarly to Earth, Miraland has twelve months and four seasons, implying both Miraland and Earth rotate on tilted axes. They also share the same zodiac systems, both the western and the Chinese zodiac, which originated from Cloud Empire in Miraland.[23]

Overall, they share many of the same varieties of flora and fauna, and because of this have the same food.

The two universes have a number of cultural differences, the largest one being that fashion seems to take the place of traditional academics in Miraland, with schools and careers largely dedicated to designing and styling.

The people in Miraland treat Nikki's appearance and the existence of another world with great skepticism. Nikki did not tell Kimi she was from another world until they had known each other for a while, and though Kimi admitted it did sound unbelievable, she expressed interest in hearing about Earth.[24]

Retrieved from "https://lovenikki.fandom.com/wiki/Earth?oldid=109959"
Community content is available under CC-BY-SA unless otherwise noted.