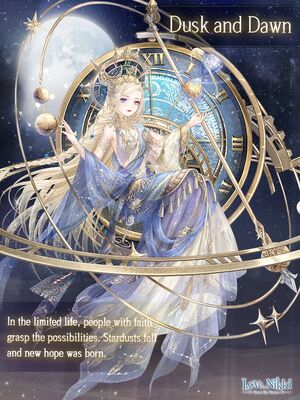 In the limited life, people with faith grasp the possibilities. Stardusts fell and new hope was born.

Dusk and Dawn is a Wasteland suit that could be obtained from the Fate Echo Event. It can now be obtained through Recipe Crafting.

Even in the darkest night, people would look up to seek stars. The light of the stars flows from the past to future.
– Light of Star

The birth of Goddess Norn brought the faith to humanity. People believe that sand of fate flow through her fingers.
– Ocean of Moonlight

The stars in the sky are the gems on the web of fate. Past, now, and future are threads at her disposal.
– Flowing Thread

She sees people climb the cliff of joy, and drown in the ocean of confusion. She doesn't ask fate, she is the fate.
– Sound of Samsara

Every rise of sun and moon is like a sand grain that composes the desert. Nobody sees her, but she is everywhere
– Stars Aligned

People look up at everything that surpasses the known. Thus they worship Norn and pray for her mercy and protection.
– Crown of Light

All the clashes turned into a long sigh finally. When faith cannot bring peace, then it will be abandoned.
– Heavy Moonlight

Disasters and wars rise. Pain and misery, like a torrent, break the knot of fate and bring in the new order.
– Echo of Fate

The stars are always there, but people stop looking at them. Only Norn's followers still have faith in the stars.
– Back to Past

If resemble time to water, the high pitch of life is like a spray. People left their trace on the beach of fate.
– Shimmer in Starlight

In the limited life, people with faith grasp the possibilities. Stardusts fell and new hope was born.
– Sea of Moonlight

Diviner asserts that Goddess has forsaken the tribe. Norn became taboo and the legend was buried under the sand.
– Mortal Moment

The turnover of the world has its own way. Slowly but constantly Norn weaves the annal of time.
– Dawn and Dusk

The giant dial guards the elapse of time. As people leave,
– Tower of Time

In the night, the desert shows its peaceful side. In the dark, only starlight lights up the path home
– Trail of Time

The neon in the night is dazzling. As the boundary of light and shadow goes vague, I only remember the stars.
– Amber Glaze

The mercy of God gradually emerges in the silent decision. Fate is not the end, but the flowers in thorns.
– Destined Flower

All the inverted dreams stop this night. It's our secret buried in the shadow.
– Night of Falling

Retrieved from "https://lovenikki.fandom.com/wiki/Dusk_and_Dawn?oldid=145728"
Community content is available under CC-BY-SA unless otherwise noted.