The Dream Weaver is located beneath the Stylist Association on the main map. It is unlocked after completing V1: 5-6 Bookish Girl Timi (3) (Maiden).

In this section, you can experience stories that tell you more about various characters. At certain points in the stories, you can obtain Spirits that help boost your score in Journey and Commission stages, and challenges in the Stylist's Arena.

The entry screen shows a portrait of your currently selected stylist and five different options:

Dreamlands contain interactive stories, also refered to as dreams or Dream Weaver routes, that show you more about the selected character's background or events related to them that don't appear in the main Journey.

The dreams are divided into chapters, often requiring the player to own certain wardrobe items in order to unlock them. Completing the first chapter of a Dream Weaver route allows you to obtain a Spirit of Sheen, which can go through several stages of evolution as you progress in the story. Finishing chapters also rewards you with precious stones (the key elements of Spirit evolution), as well as gold

, materials for customization, and occasionally pieces of clothing.

Some chapters contain dialogue options, while others need the player to win styling battles. Contrary to the game's implications, the dialogue options don't have long-term effects on the story, and don't affect the rewards you receive or the pieces of information you can unlock about the stylist.

Some Dream Weaver routes can only be accessed by obtaining the related Spirit during a Time-Limited Spirit of Sheen Event.

The institute provides 3 quests per day. You can refresh the quests for 50

The Dream Isle is a pavilion that rewards gold

, and sometimes a Spirit of Sheen. The player is given one free draw per day, each further draw costing 30

During a Time-Limited Spirit of Sheen Event, a Spirit appears for a number of days with the opportunity to obtain it and unlock the associated Dream Weaver route. Each draw gives you "luck", higher luck increasing the chance of winning the Spirit of Sheen. Time-limited Spirits eventually return, but your luck meter will be reset to zero.

Each Spirit of Sheen is connected to a specific attribute, and adds a certain number of points to that attribute's score when equipped in styling battles. As you progress in their respective Dream Weaver routes, Spirits can go through four stages of evolution, increasing the number of points they provide.

1. Acquiring the new form of the Spirit

These points in the story are marked by a special chapter icon depicting the new form.

Evolution process of Soul of Sword from Lunar: Millennium Dream

2. Leveling up the corresponding Spirit Skill

The primal form of a Spirit (floating orb) grants 200 bonus points with no other requirement than obtaining it. From then on, the player will encounter

Trial chapters, which show an icon of the Spirit Skill and the number of extra points the next level of evolution will be able to contribute to their score.

Each previously gained form of the Spirit will level up until they reach their highest tier, indicated by the number of rarity points (e.g. 3 hearts means the form can reach Level 3).

These phases can be completed by exchanging a number of the following precious stones, which can be gained by completing dream chapters and daily Institute Quests.

Evolving a Time-Limited Spirit of Sheen and some long-term Spirits requires a number of the following two stones, which can be obtained by drawing from the Dream Isle.

While all forms of a Spirit will be kept in the wardrobe and can be equipped in styling battles, the number of extra points they provide stays fixed, determined by their level of evolution.

Some Dreamlands and most of the long-term Dream Weaver routes can only be accessed after completing a particular chapter in another dream. This generally means going through the stories in the order they're listed in the selected stylist's Dreamland, but in some cases you may need to complete an other character's dream first.

The suggested order for this is the following:

Dream Weaver routes that can only be unlocked by obtaining a Time-Limited Spirit of Sheen are not included here, as they have no prerequisites other than having the Spirit. Completing them or obtaining parts from them is not required for any other Dream Weaver route either. 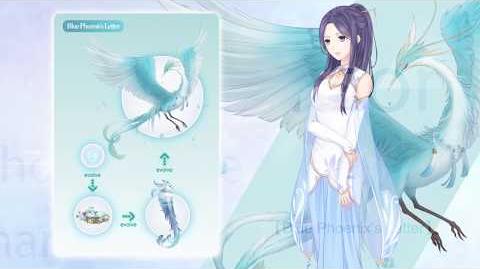